Now that all the reno dust has settled in my kitchen, I get to play around with my countertop displays. On one side of the kitchen, I’m housing my toaster, kettle, and knife block. I’ve left a large part of the counter free of gadgets because it’s a nice long workspace. On the other side, on the counter between the stove and the fridge, I added my new little white radio, but the line-up isn’t as good-looking as I know it could be. 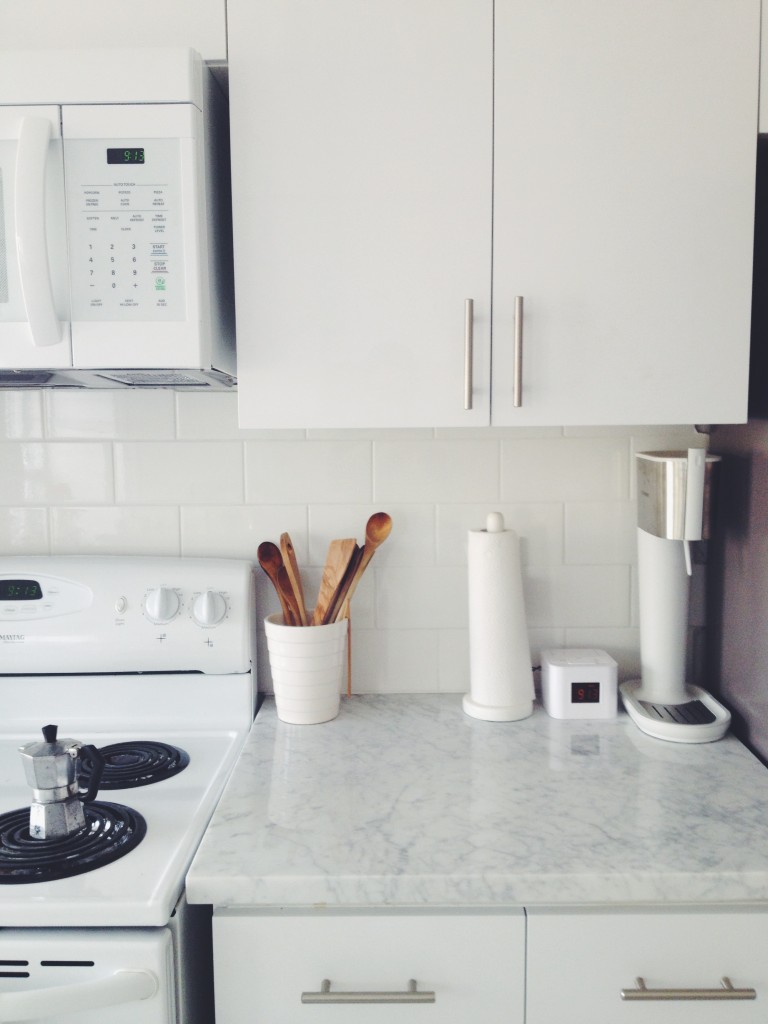 I put a little request for style advice outĀ on Instagram and theĀ IG community had some great responses (thanks Giulia, Anita, @TouchofPink2012, @erinpconner), so I tried them out.

First, I tried gathering some things into a small tray… 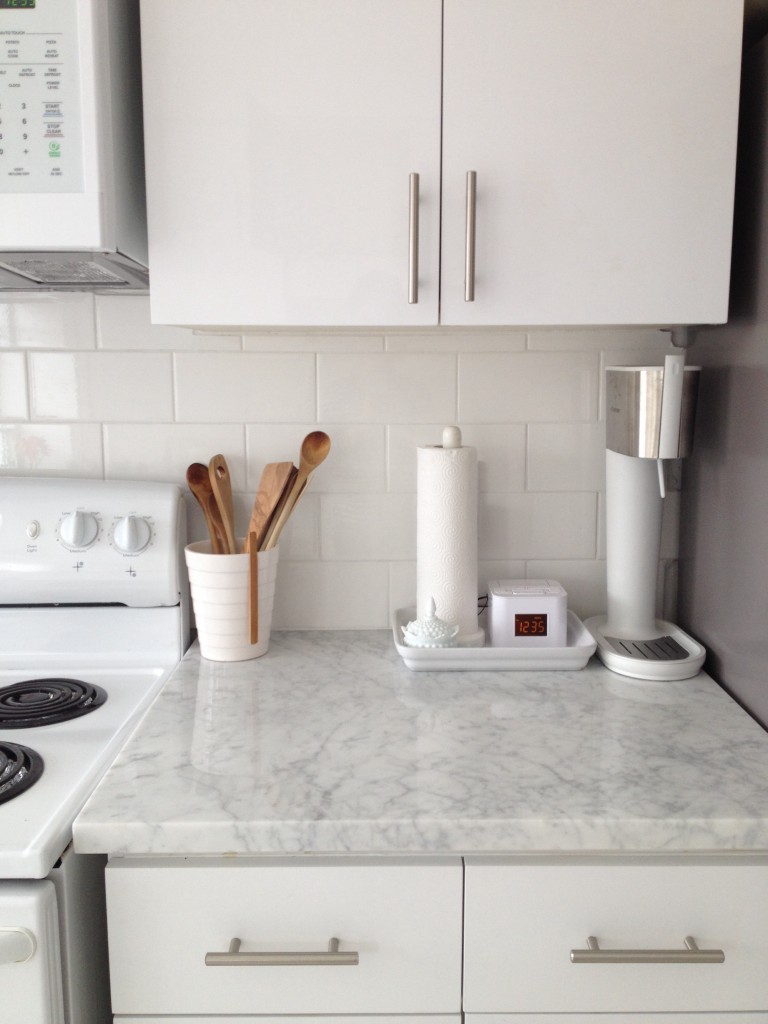 Next, I tested out a larger one… 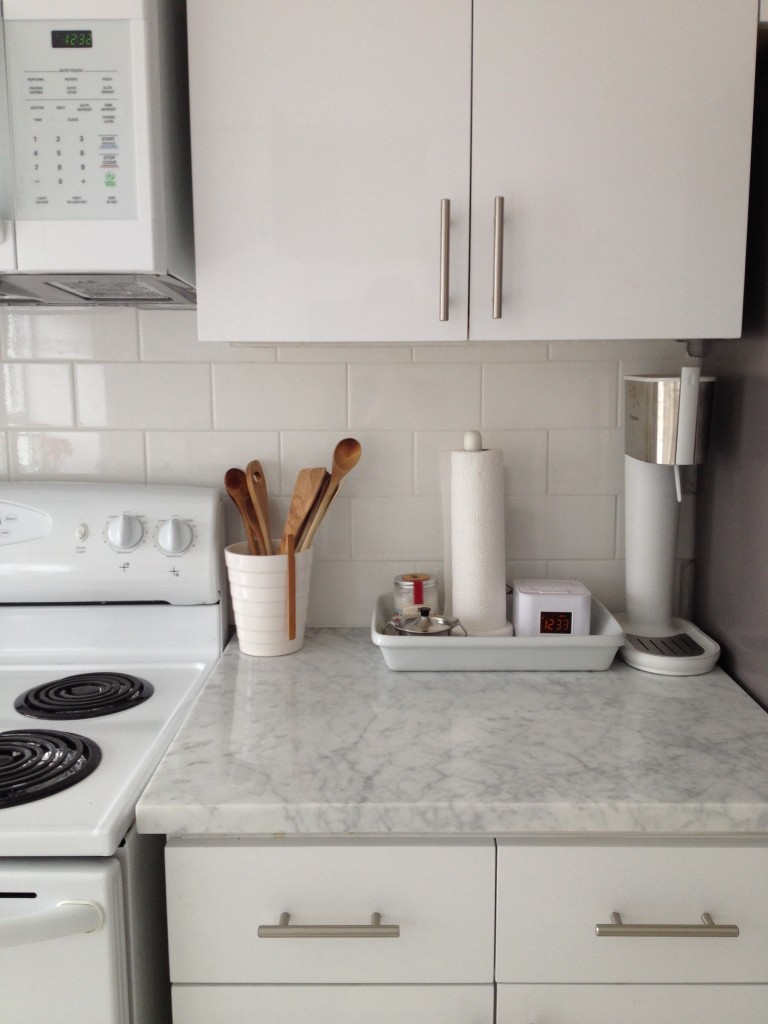 I had the trays in the house already, so it was no big deal to test them out. I also have littleĀ containers inĀ a variety ofĀ materials that I played around with – they’d be perfect for holding sea salt (not that I really ever cook with a whole lot of salt, but this is not about practicality, it’s about style!).

Finally, I placed a piece of artwork behind myĀ radio and Soda Stream. The painting that I leaned against the wall might be too big for the space;Ā I also think that I want to hang it on one of the kitchen walls. 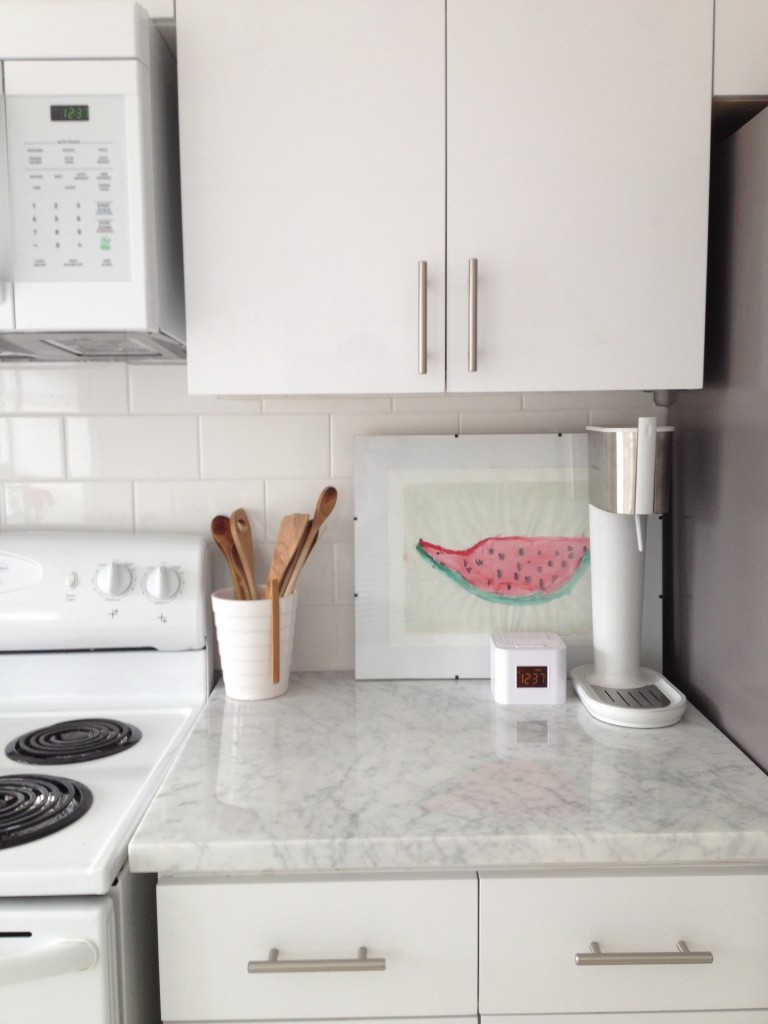 And that’s about as far as I got. IĀ need more styling practice.Ā I also realizeĀ that I never actually use paper towels, so it’s really pointless to have them taking up valuable counter real estate.Ā More changes ahead!

Erica Cook is such a styling master and I would like to follow her lead. I’ve been on the lookout for fancy black & white bottles of cooking supplies (what I would use them all for is beyond me), but I’ve had zero luck as of yet. Take a look: 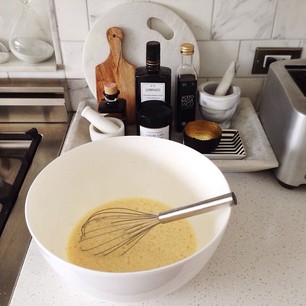 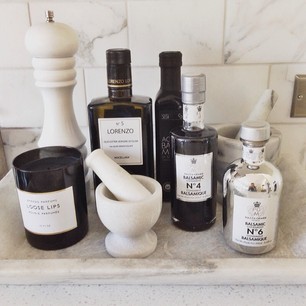 I am really enjoyingĀ being on the styling stage of my house reno. It’s about time!

Update: I just found this article about how to style a kitchen countertop on The Everygirl. The photos are beautiful. I’m afraid of styling the countertop too much – I’d rather have an empty counter so I have space for food prep than a countertop full of cookbooks and bowlsĀ of just-for-show lemons.

Hi all. Was the weekend a good one? Did you cook up a storm? How do you feel about getting creative this Monday morning? Good. I’m glad. Have I got a contest for you!

I wrote about Panasonic’s induction products last week and this week I’m challenging you (it’s an easy challenge, I swear) to create your own Panasonic kitchen style inspiration board using theĀ Panasonic induction cooktop and convection oven.

Here’s my inspiration board to serve an example: 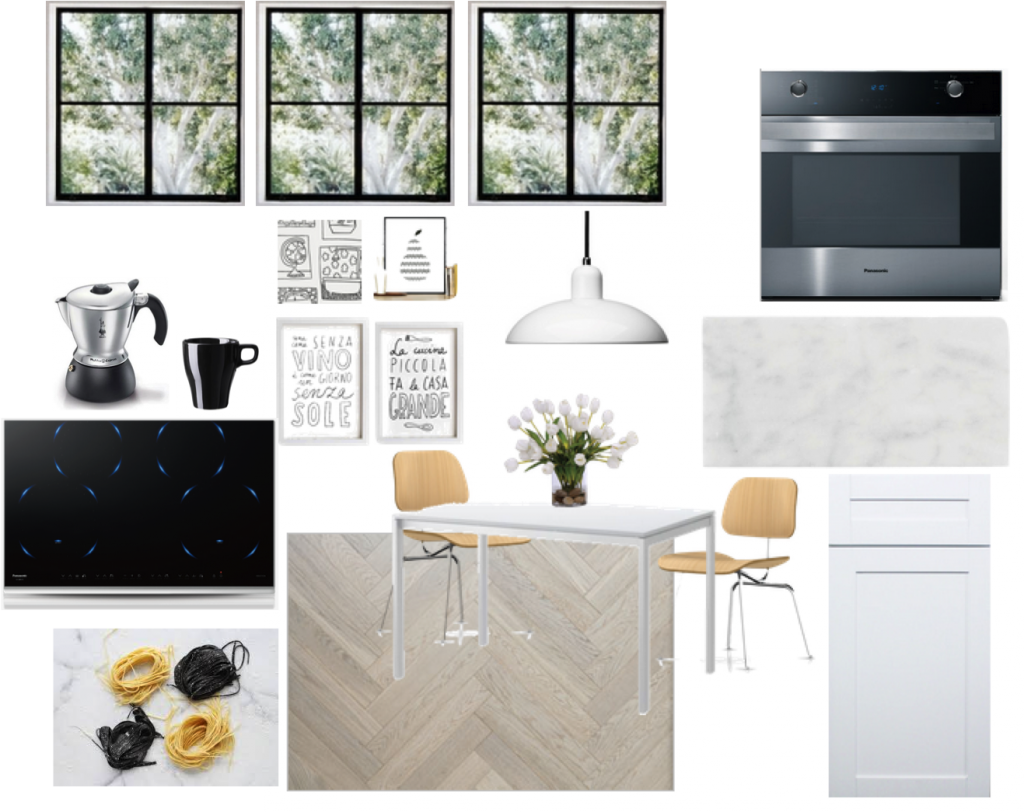 My inspiration board includes items that are smooth, sleek, and highly functional – like the Panasonic appliances, the Kaiser Idell light, and the Bialetti coffee maker. I’m also inspired by natural sunshine, so this board includes gorgeous large windows. The fresh flowers promise the arrival of springtime and growth. The fresh squid ink pasta and black and white art show the beauty that comes from making things by hand.

But enough about my inspiration…it’s your turn!

What would you include in your #PanasonicStyle kitchen inspiration board? Go ahead, create one. When you’re done with your board, email it to me along with your contact info and I’ll add it to the #PanasonicStyle Pinterest board. That’s all you have to do to enter the contest!

So, you probably want to know what’s up for grabs, right? This is your chance to win… 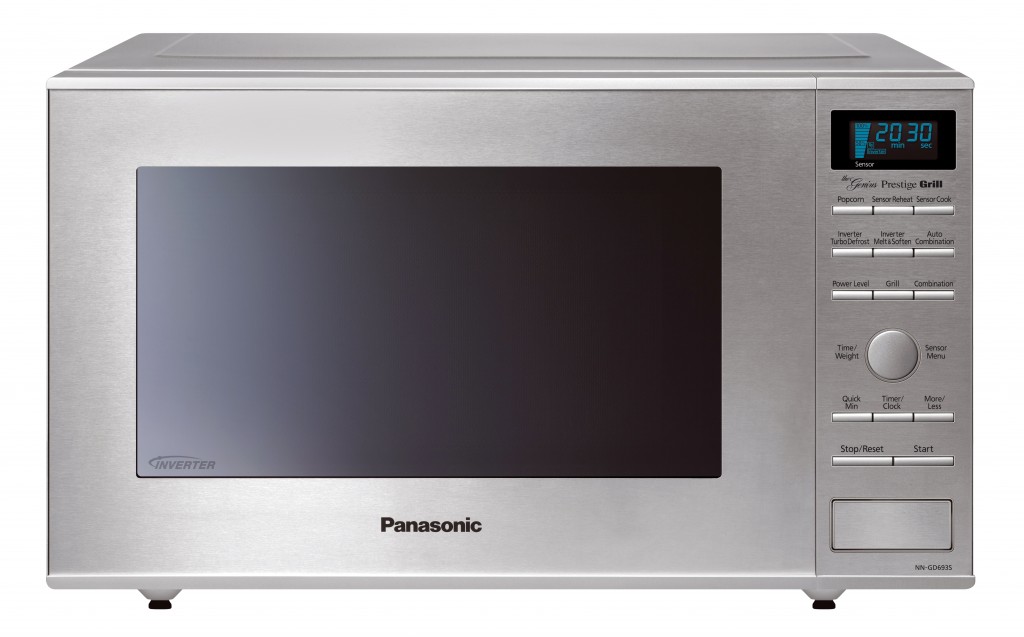 A Panasonic Mid-Size Genius Inverter Microwave! The winner will receive the microwave as well as the trim kit (so that you can mount the microwave above the stove/over the counter). This prize is a biggie – valued at $470! Um, yeah. I told you it was going to be worth your pinning efforts!Ā Who doesn’t want a new microwave, right?

2. Email me your board – whitecabana [at] gmail [dot] com

3. The contest deadline isĀ Friday February 21st, 2014Ā and it’s open to Canadian residents (over the age of 18, excluding Quebec).

Your popcorn kernels will thank you for entering and so will I!

Many thanks to Panasonic for sponsoring this giveaway and related posts.

I recently learned that Panasonic has introduced a new induction cooktop. Induction heat has been around for years, but I feel like it’s only gaining momentum for home kitchens now. 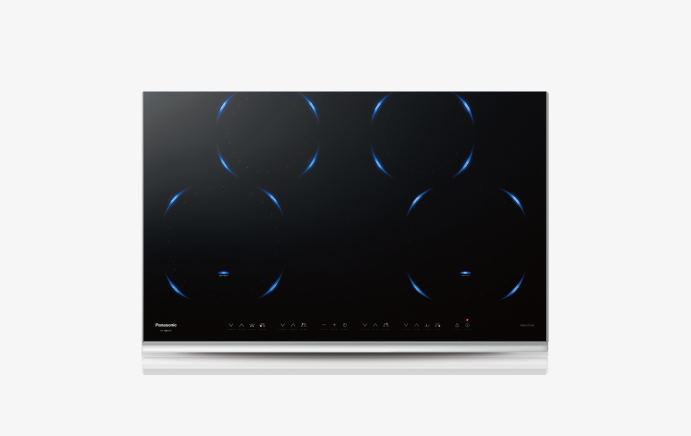 Panasonic’s new induction cooktop sort of looks like a television, doesn’t it? So sleek and shiny, it is! Panasonic says, “The induction cooktop features infrared-sensors for precise temperature control and electrostatic glass touch technology for easy operation.” The cooktop also has the ability to rapidly generate heat. The fact that the induction cooktop doesn’t use flames or elements has got to mean that it’s pretty darn safe to operate*. Panasonic assures its customers that the cooktop surface remains cool to the touch, except just beneath where the cookware sits. The cooktop’s flat surface is much easier to clean than a traditional stove with burners and (those darn) burner guards.

But that’s not all that I’ve learned. Panasonic is also sharing news of its new convection oven. 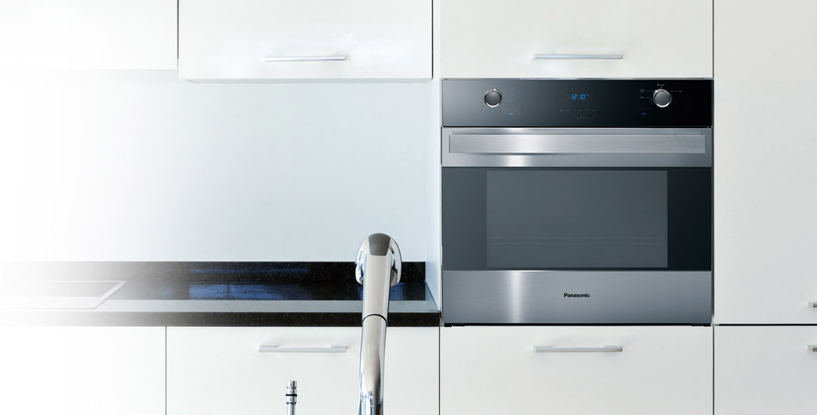 I love that, like the cooktop, the convection oven is so sleek. It looks perfectly stylish in an all-white kitchen. Use of the convection oven should result in “even baking, browning, and crisping” as well as juicy and flavourful poultry and roasted meat. I wish it promised that it would cook for me every night. š

I’d love to hear your view, but I am especially curious to know if anyone has an induction stove. Well worth it? Did you buy a completely new cookware set?

Come on back on Monday to learn about a not-to-be missed giveaway that I’ve organized with the good folks from Panasonic. Your kitchen will definitely want you to enter this one!

Ā *I have never actually cooked on an induction cooktop.

You’ve now seen the progress I made over the holiday break on my powder room and living room. Today I’m sharing photos of my kitchen. Here’s what it looked like before I moved in: 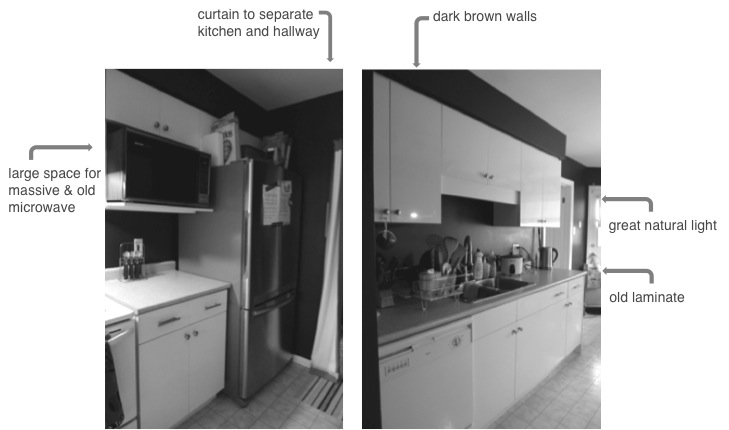 I have now finished painting the kitchen (Chantilly Lace like the rest of the house), additional cabinets were installed, and lighting was changed. 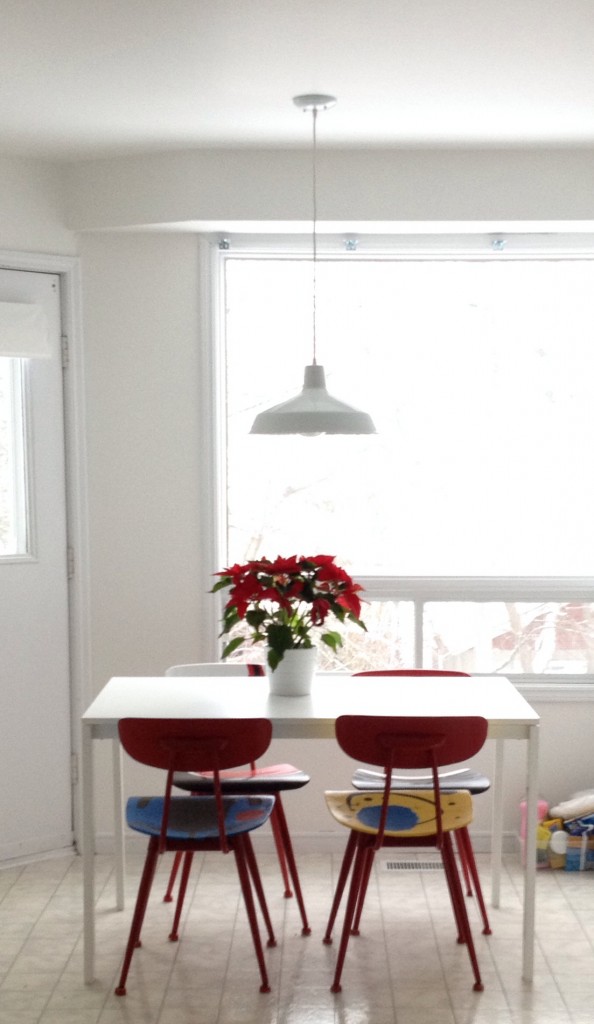 Above – you can see that I do in fact have some colour in my home. I painted these chairs with Miro designs when I was living in Kingston about 7 years ago. The table is from Ikea. Don’t pay attention to the floor – I’m still undecided about what to do with it. I also have to put up the blind. (Oh, and the stuff on the floor has now been moved.)

If you follow me onĀ TwitterĀ or Instagram, you know that my kitchen got a dose of pretty too in the form of new carrara marble counter tops (remember my indecision?). They are so lovely! The counter top is from Natural Stone City in Kitchener and I could not be more happy with the service I received. From start to finish, the NSC team was professional and efficient. 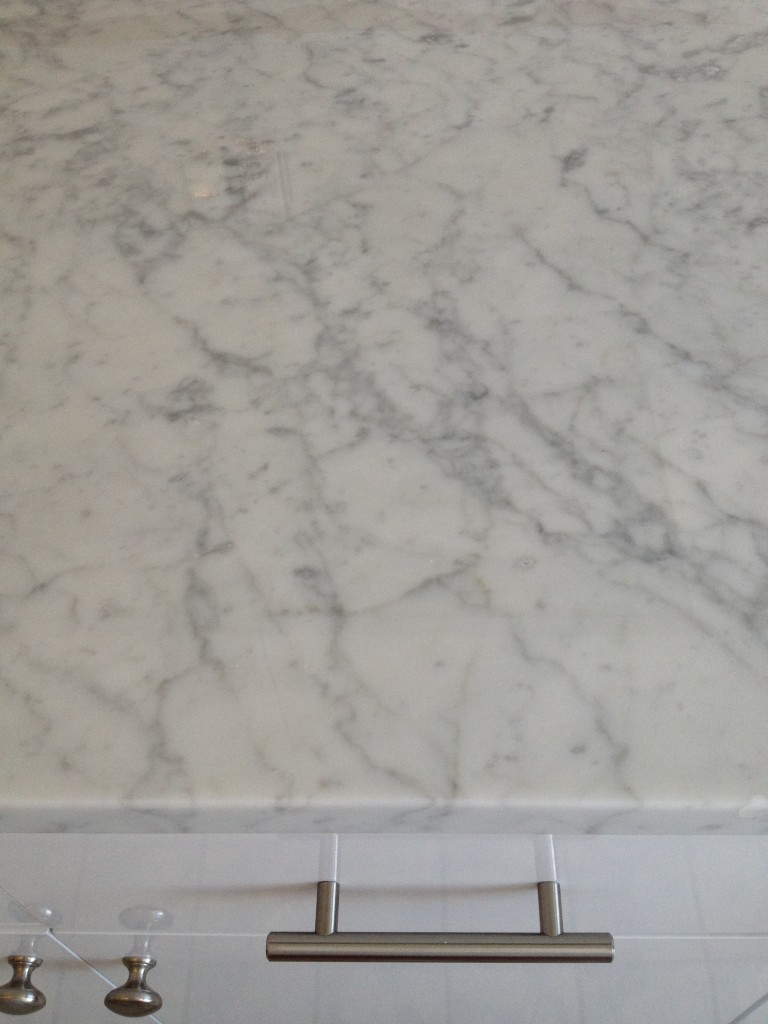 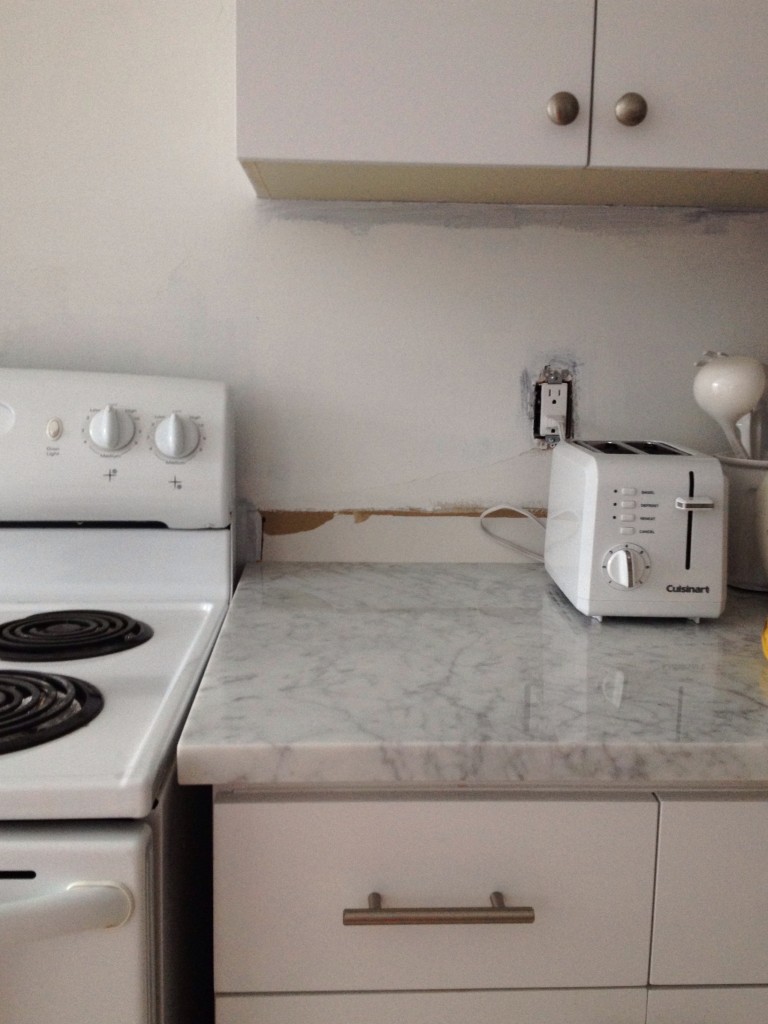 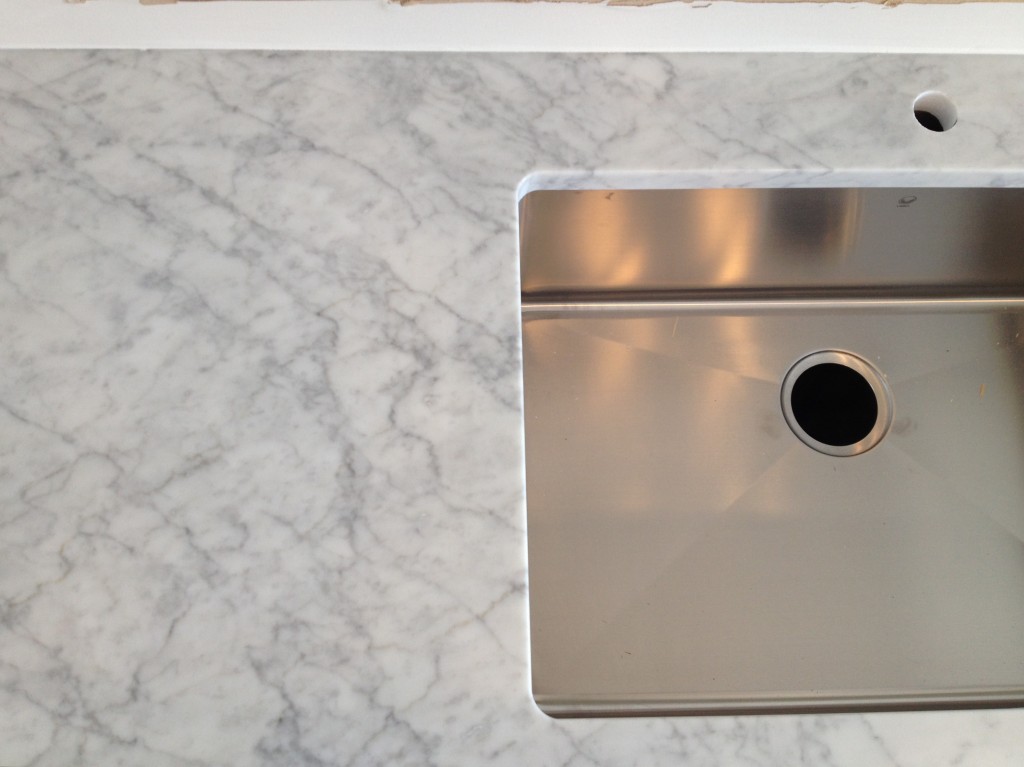 Ā The faucet has now been installed (thanks Dad!) and I will soon install the backsplash. I have been using the one-basin sink for almost a week now and I’m really enjoying it.

I think I may have settled on quartz as my new kitchen countertop option. I definitely don’t want acrylic/plastic or granite. I would love carrara marble but a) I’m not sure it’s the right choice for this home and b) I don’t know any carrara marble dealers in KW. I think I will be happy with quartz. It will hold up well and it will look sleek with my existing cabinets and backsplash tiles. That said, I have yet to make a decision about what pattern to get. I have already narrowed down my options to only white varieties. And I have eliminated the fake marbleĀ and the very snowy patterns from the list. These are possible contenders: 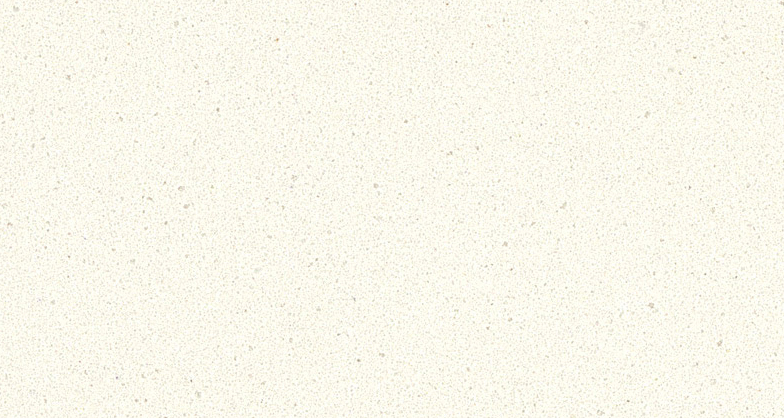 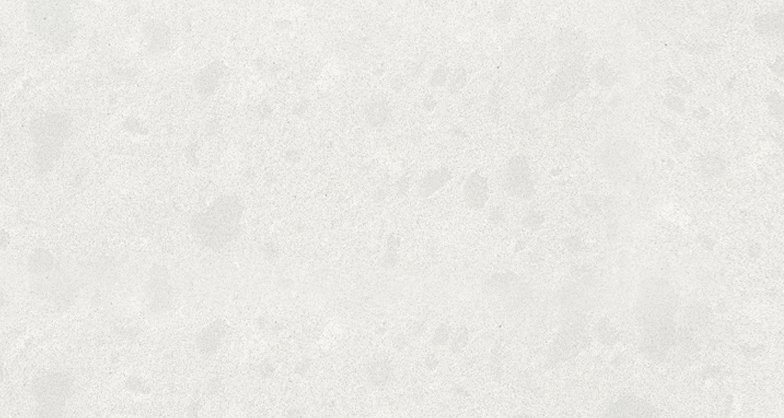 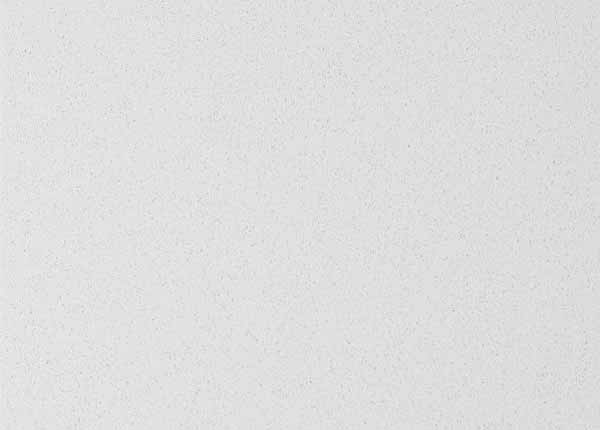 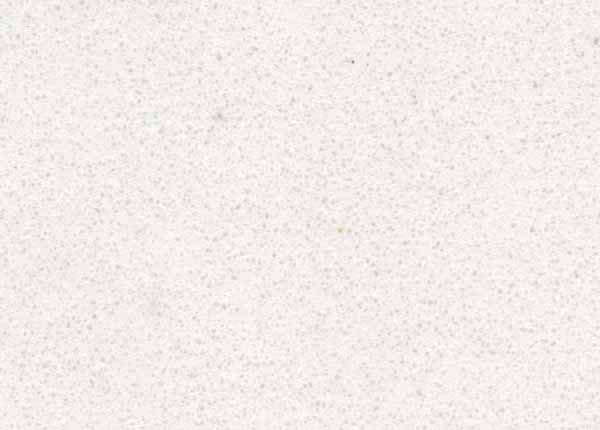 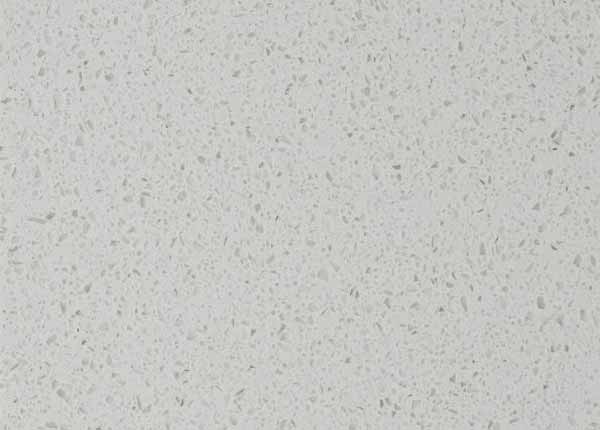 Any advice? What is your countertop made of? Do you have quartz?

All work is my own unless otherwise noted. I acknowledge sponsored posts, and I use affiliate links. All opinions are my own. Ā© Jordana
Back to Top