Here’s what’s been on my mind lately.

1. The other week, I made my way through this Warren Buffett documentary. I enjoyed it. I especially like what Buffett had to say about ethics, public speaking, and reputation. Just look at all the subsidiary companies of Berkshire Hathaway (his company).

2. Over the long weekend, I watched The Marvelous Mrs. Maisel (via Amazon Prime), and I loved it! The clothes, the characters, the decor, and the story…yes, I enjoyed all of it!

3. I have 6 more weeks of my last MBA course. I can’t believe it. It’s been an almost 4-year long degree (part-time). I’m pretty excited to get some free time back into my life. I’ve really enjoyed the courses I’ve taken these last two years (e.g., negotiation, mergers & acquisitions), and the struggles I had in the core courses in my first two years are a distant memory. If you’re considering an MBA, I’d recommend you go for it. Then again, I’m a fan of further education regardless of the degree, so my advice is always the same.

4. I popped into the mall the other week looking for a pair of basic black workout tights. Instead, I came home with these colourful tights from Aerie. I don’t wear much colour to work, but I do embrace it for workouts.

5. I made this salmon and spinach pasta last week (with my fresh pasta, of course!), and it was delicious (and quick and easy, too). I usually go for classic pasta with tomato sauce, so I really switched things up this time!

What’s been on your mind?

Have a great weekend, everyone!

Remember when I first attempted making fresh pasta with my KitchenAid stand mixer and pasta attachments? I started withÂ the recipe that was in the KitchenAid recipe book. I failed. It was horrible. I then tried out my mom’s very vagueÂ recipe and it worked perfectly. Well, some of my family members thought I shouldn’t have been so harsh on the KitchenAid recipe and that, surely, it was my fault and I did something wrong. (I followed the recipeÂ exactly, but noone seemed to want to take my side.) Anyway, when my parents were over last weekend, I tried the KA recipe again (under my mom’s supervision). The recipe calls for: 4 large eggs, 3.5 cups all-purpose flour, and 1 tbsp water. My mom suggested that I reduce the amount of flour by 1/2 a cup. So I did. I followed the exact recipe but I only used 3 cups of flour. IÂ let the stand mixer do its job, and me and my mom watched over the bowl. I could tell something wasn’t right. After a bit of mixing, I dumped theÂ dough out onto the counter and I knew it wasn’t right. It didn’tÂ feel like it was supposed to feel. My mom was pretty surprised (“but youÂ followed the recipe, you reduced the flour”, she said). At this point, I added a bit moreÂ water, then a lot more water, then more flour. It wasn’t coming together the way it should have. I gave up. I left my mom to knead the dough for maybe another 5-10 minutes. There was a lot of kneading involved. In the meantime, I started a new batch with her trusted (and very vague) recipe. It worked out perfectly. She was still kneadingÂ the original batch of dough, while I was done with my new batch. 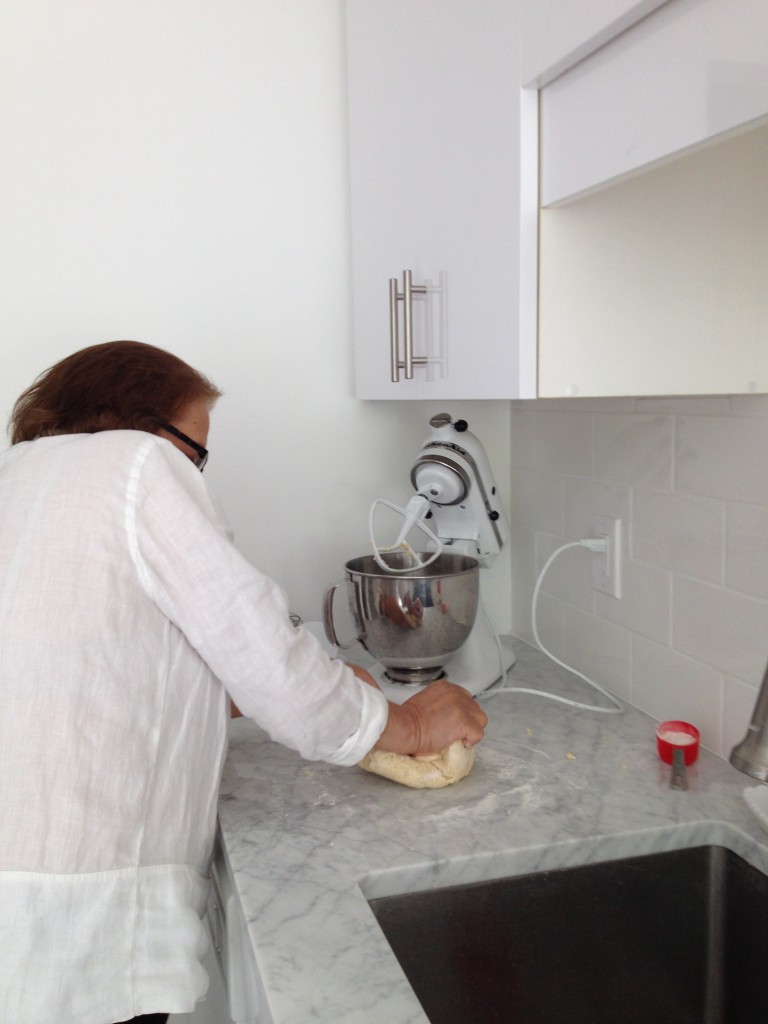 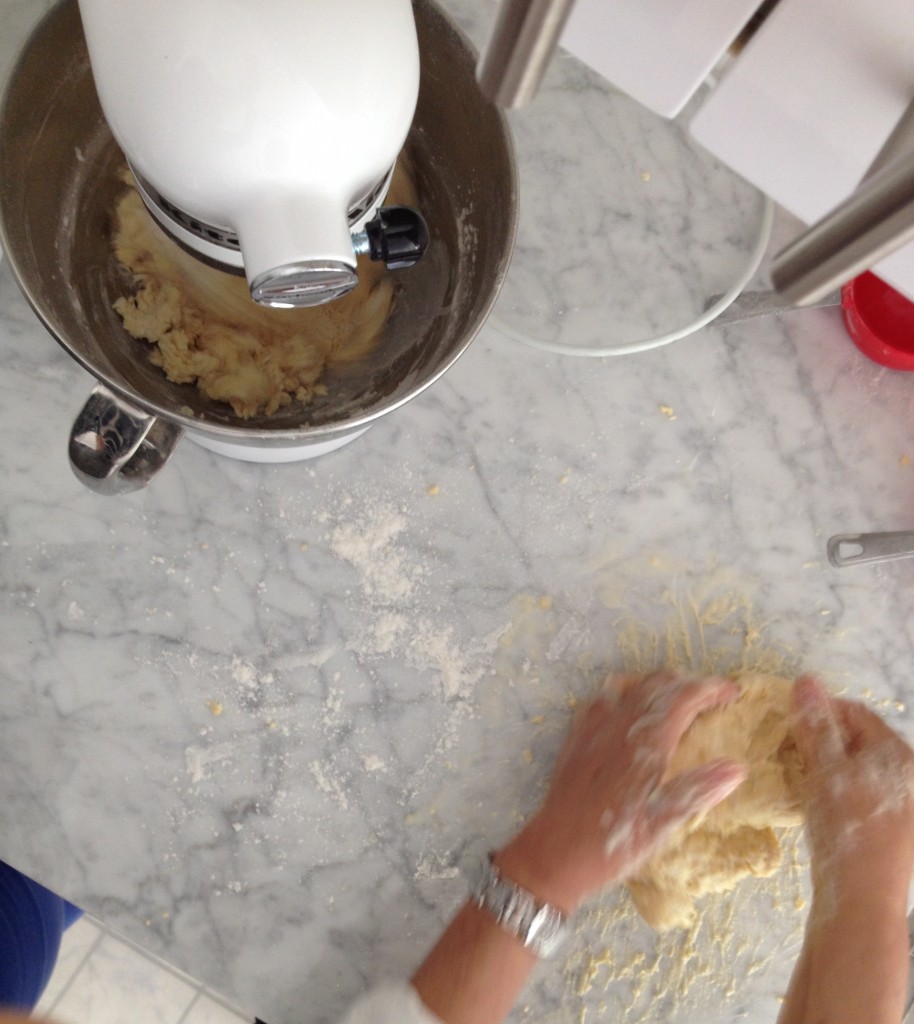 here’s mom still trying to fix the broken dough, my new version is in the mixer 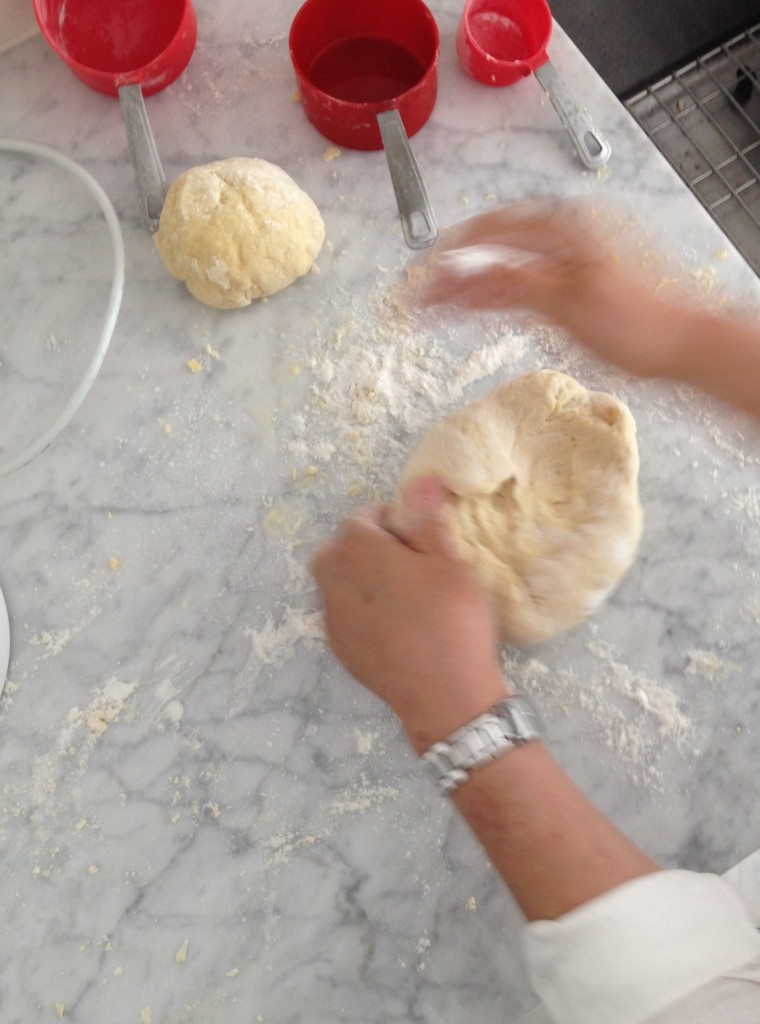 I tried to measure her recipe this time and it’s something like this: – 1 egg per person – 3/4 cup of flour per egg – a bit of water (I think I may have used about 1 tbsp) – a bit of salt (I might have used 1 tsp) Dump all the ingredients into the bowl with the paddle attachment. Mix for 2 minutes. Dump the dough out onto the counter and knead for 1 minute. After Mom finally got the first version of dough to the right texture,Â IÂ got to work with theÂ pasta attachments. First, I used the flat one to stretch out long flat pieces of pasta. I set theÂ knob on the cutterÂ to position 1 and then worked my way to number 5. I setÂ the mixer speed to 3 or 4 and the whole process was quick and easy. 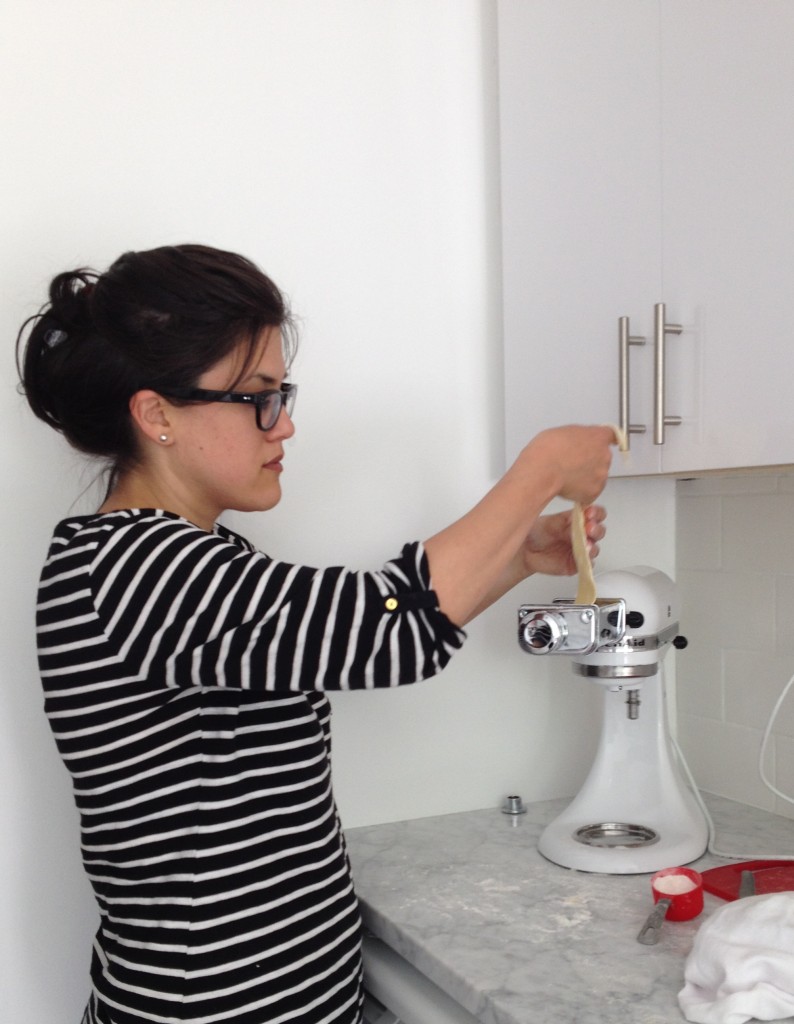 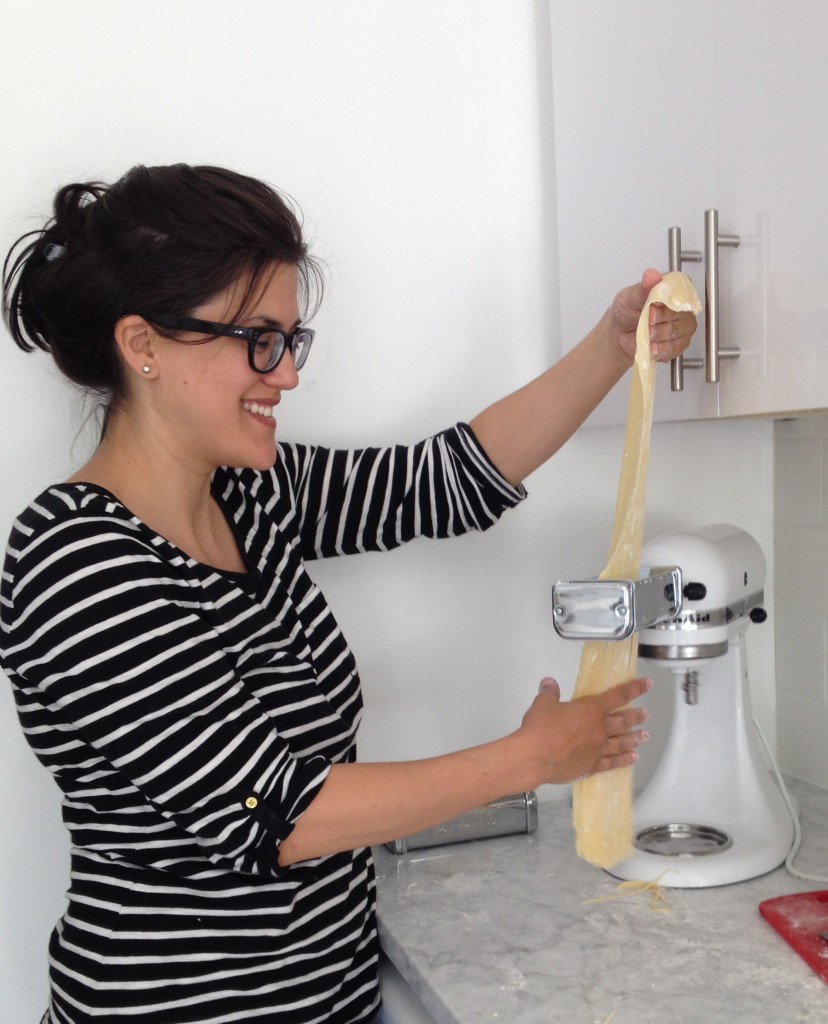 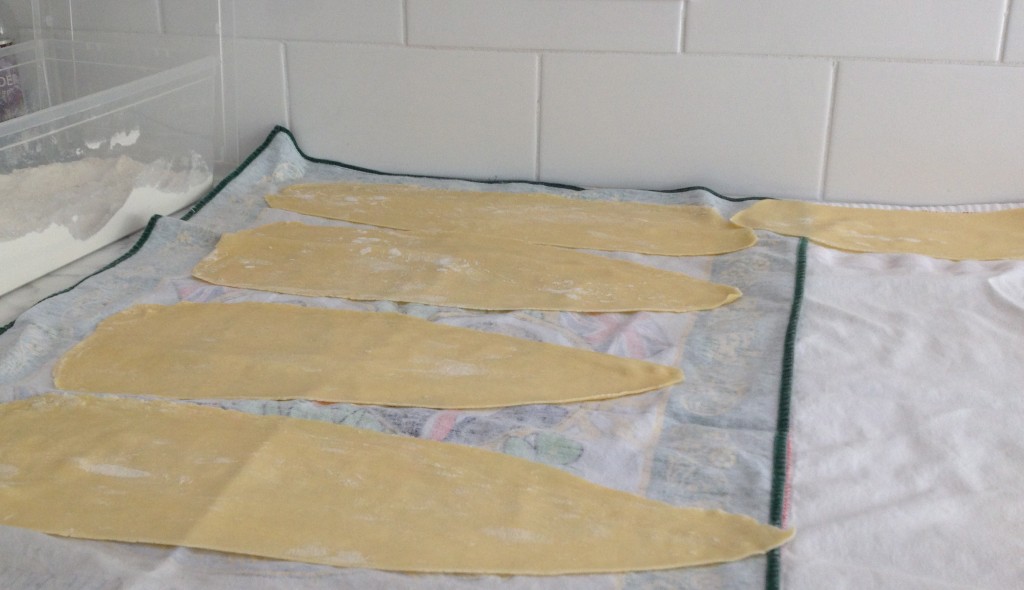 When all the dough had been passed through the smooth stretcher attachment,Â I attached the fettucini (and then the spaghetti) cutterÂ to the mixer (quick and easy) so that I could pass the long sheets of pasta through to make the noodles. I floured the pasta sheets before passing them through the cutter. 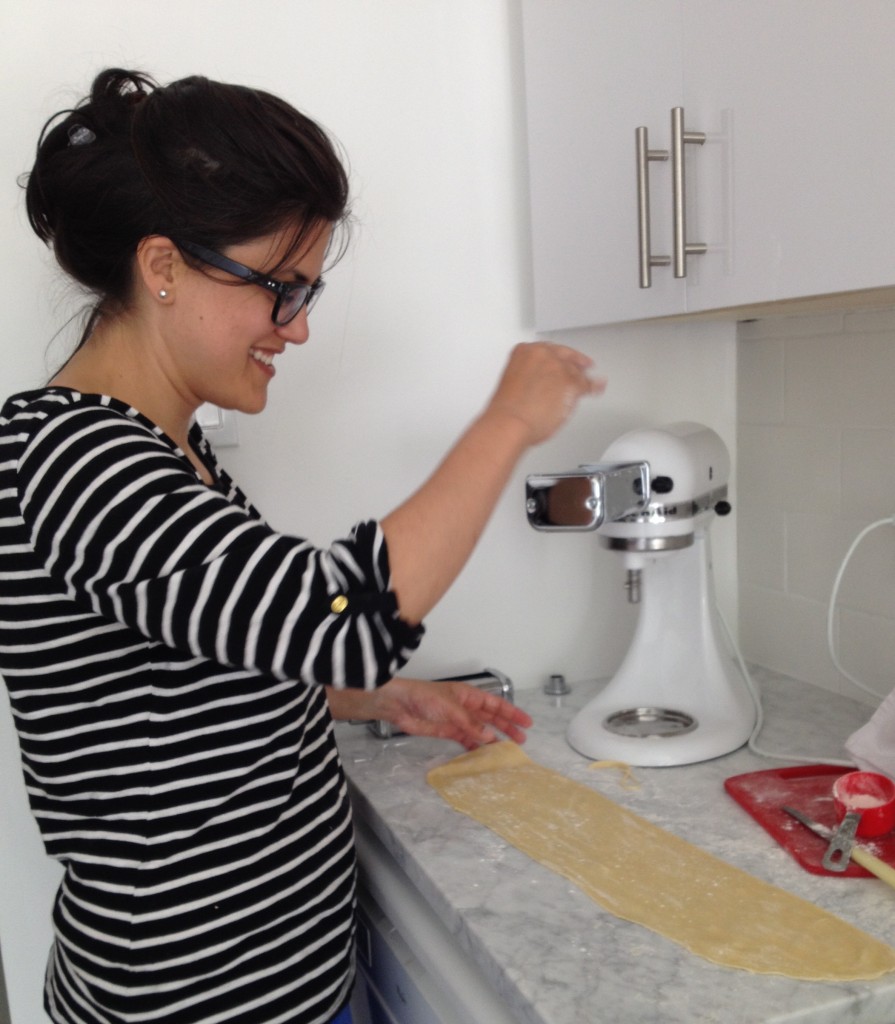 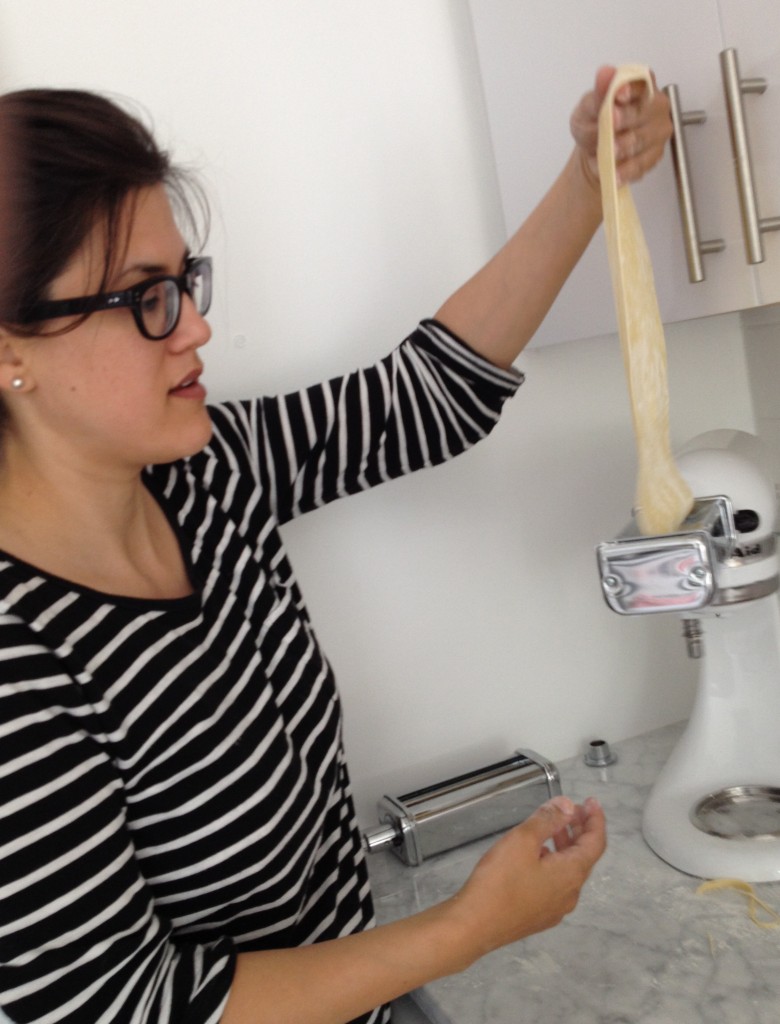 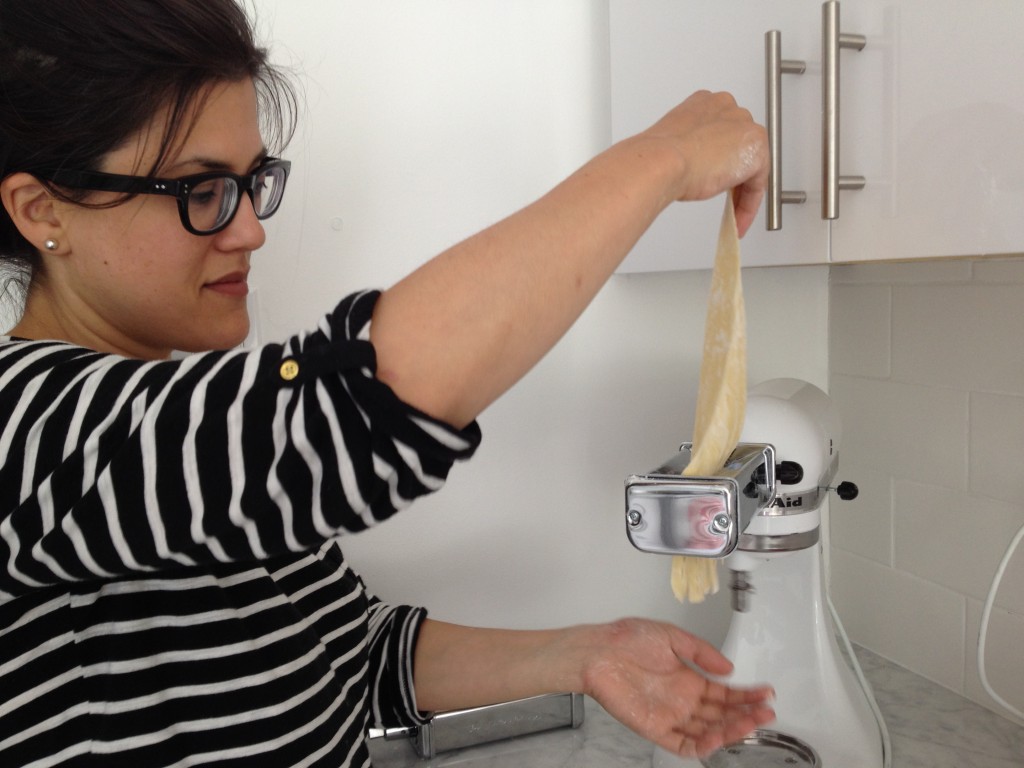 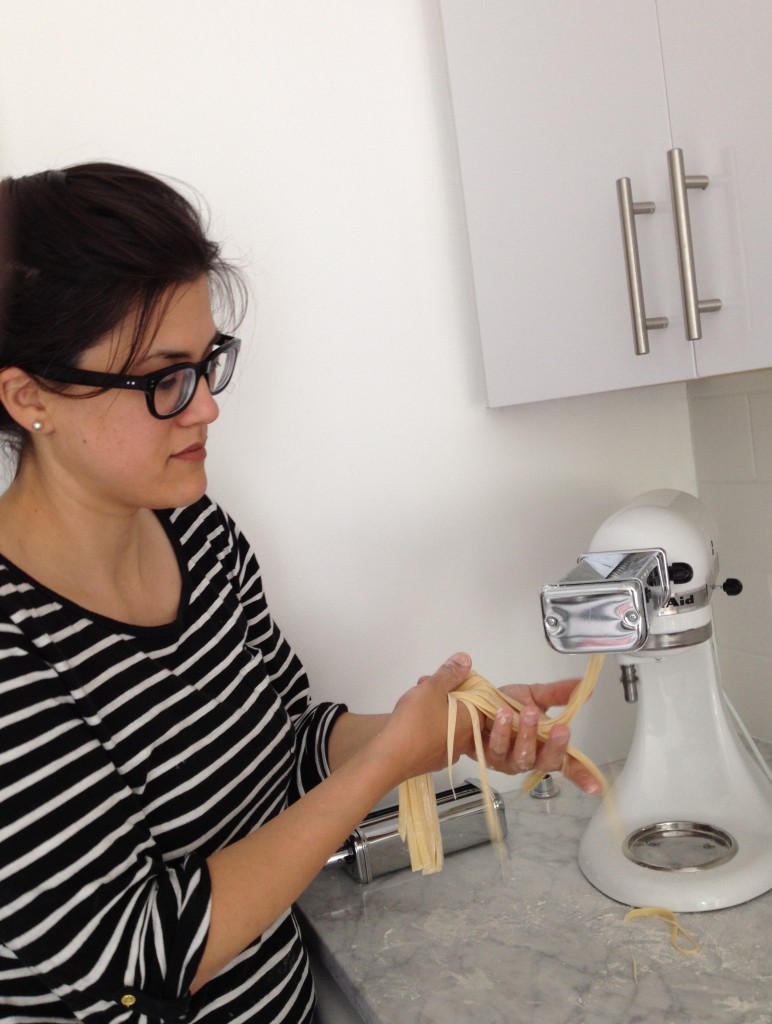 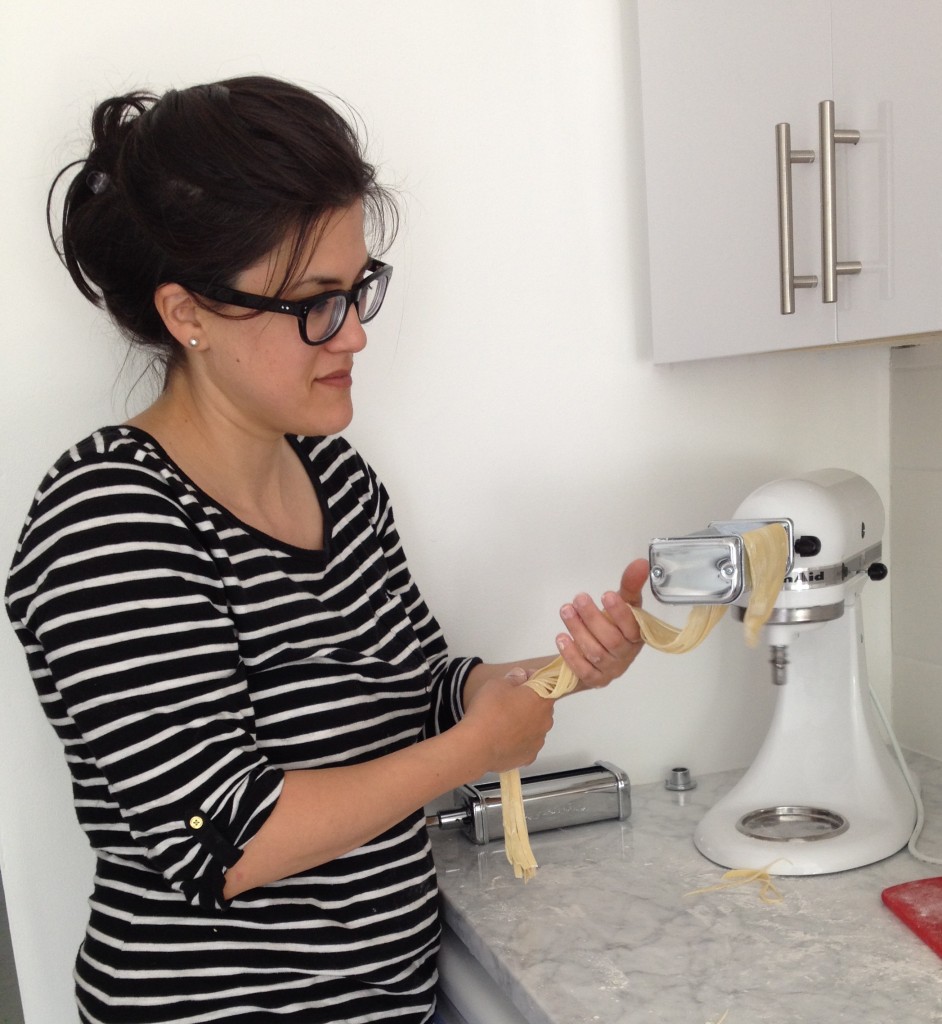 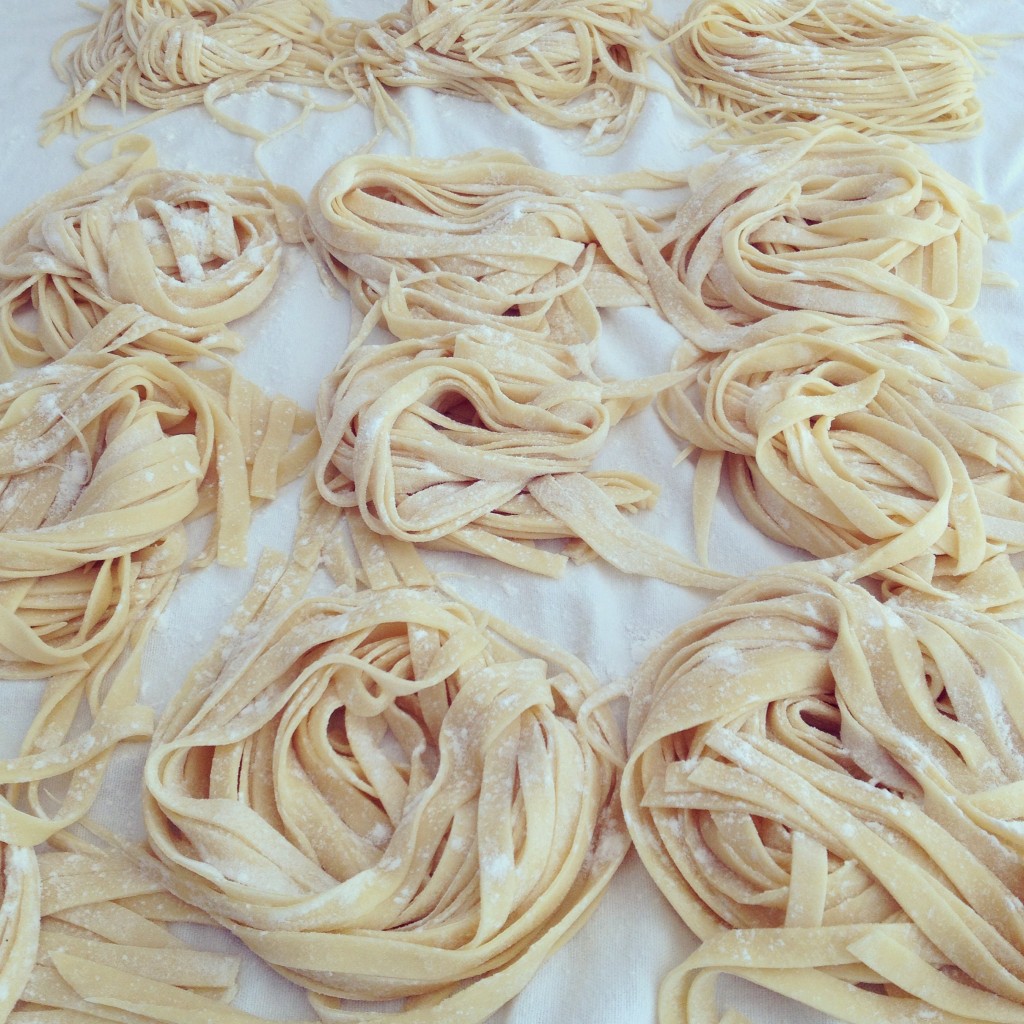 I like twisting the pasta into round spirals, but I flour the heck out of them before doing this to avoid sticky strips. The pasta (both versions) turned out very well, and it was delicious paired with fresh tomato sauce (I tried my mom’s sauce recipe, which she thought was almost as good as hers…tough crowd). In the end, neither of usÂ are sure of the amount of ingredients that my momÂ used to adjust the KitchenAid dough, but if I try the recipe again, I’ll start with 2 cups of flour and add more as needed. KitchenAid sent over another version of the recipe when they heard I was in pasta-making distress (via Twitter, naturally), so I may give that one a try too.

Thanks, Mom, for your help and for snapping some great photos!

Although I’ve been thinking about the KitchenAid stand mixer for some time now,Â I only finallyÂ bought myself oneÂ last week.Â Everyone and their brother/mother/sister/friendÂ seems to haveÂ oneÂ and they all rave about how great it is, soÂ I had little doubt that it would be fabulous. There are plenty of colours to choose from, but it was an obviousÂ choice for me.Â I’ve used my KitchenAid Artisan stand mixerÂ twice alreadyÂ and it’s worked out very well! No surprise there, right? 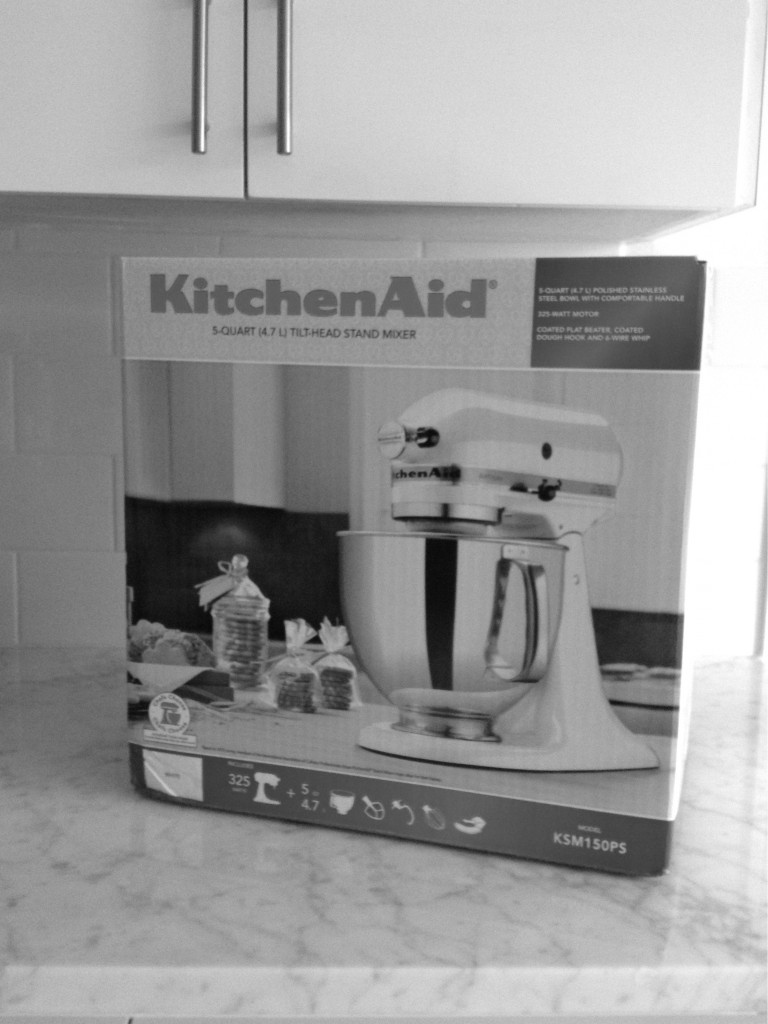 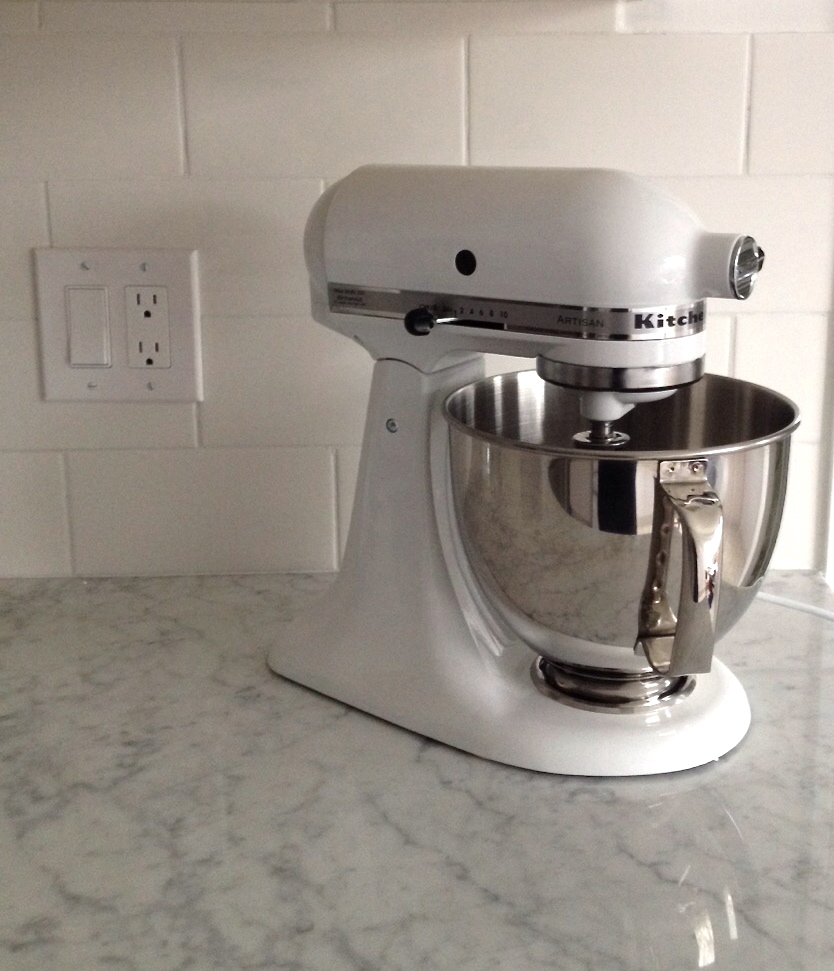 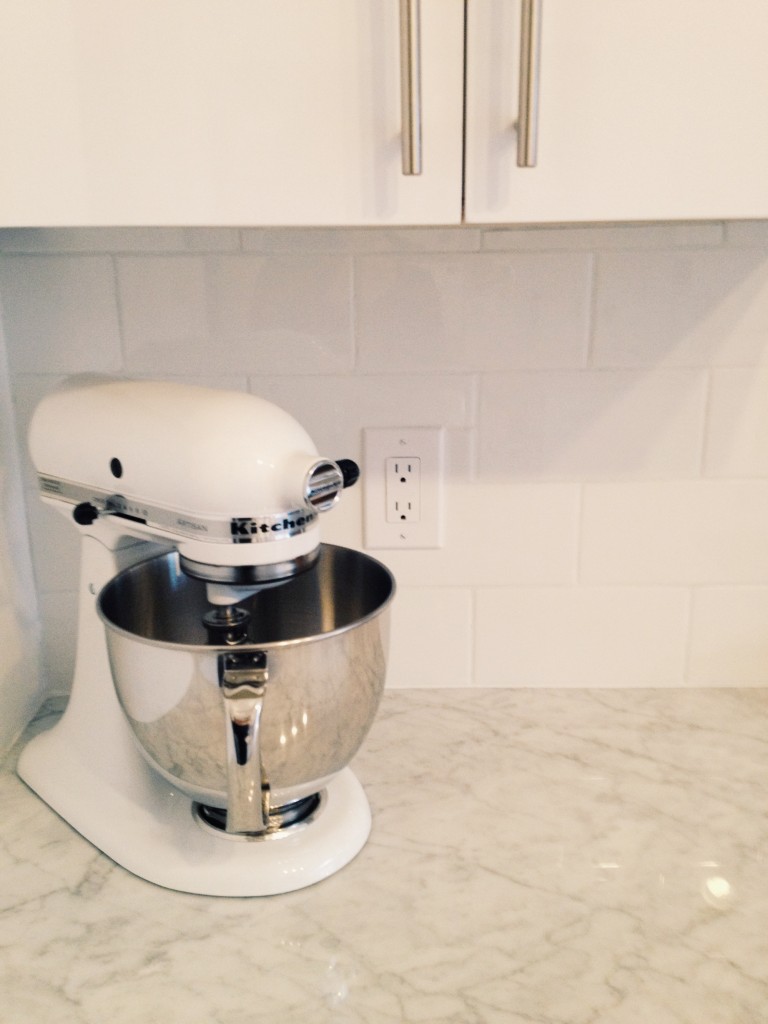 The first thingÂ I ended upÂ baking with the stand mixer was the brownie recipe that was listed in the instruction/information booklet that came with the mixer.Â It was very easy and straightforwardÂ and the endÂ result was ab fab chocolateÂ goodness. I also made madeleines and they turned out perfectly.Â I love theÂ fact that the mixer can do the work while IÂ measure out the ingredients. The convenience factor is awesome! 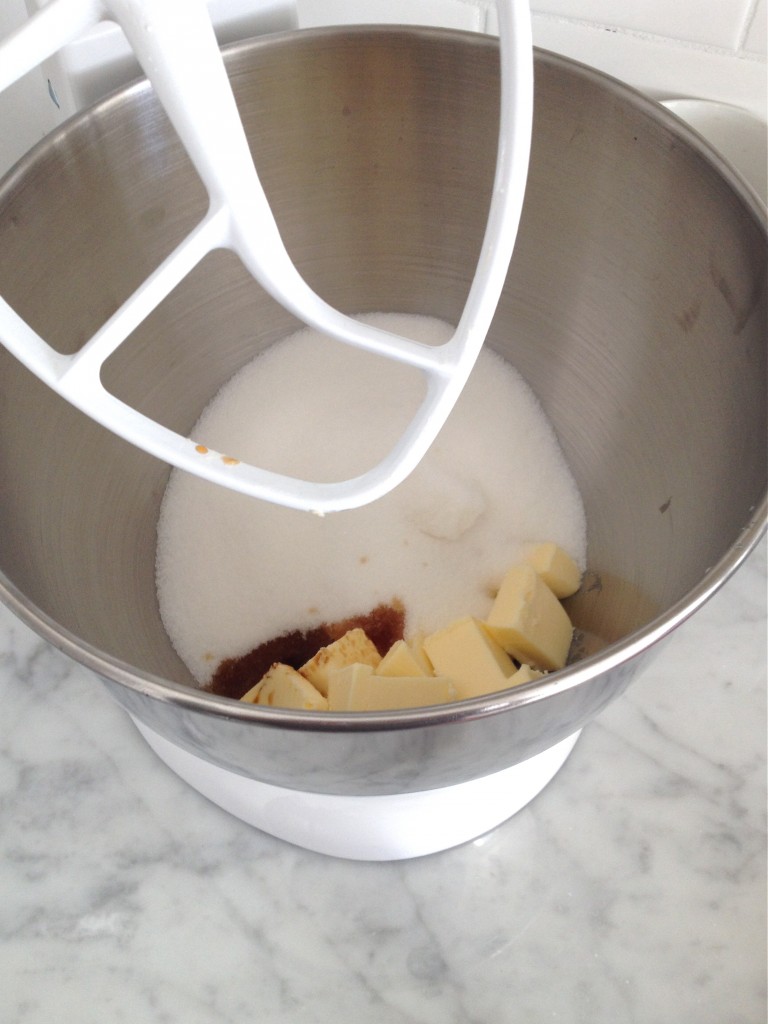 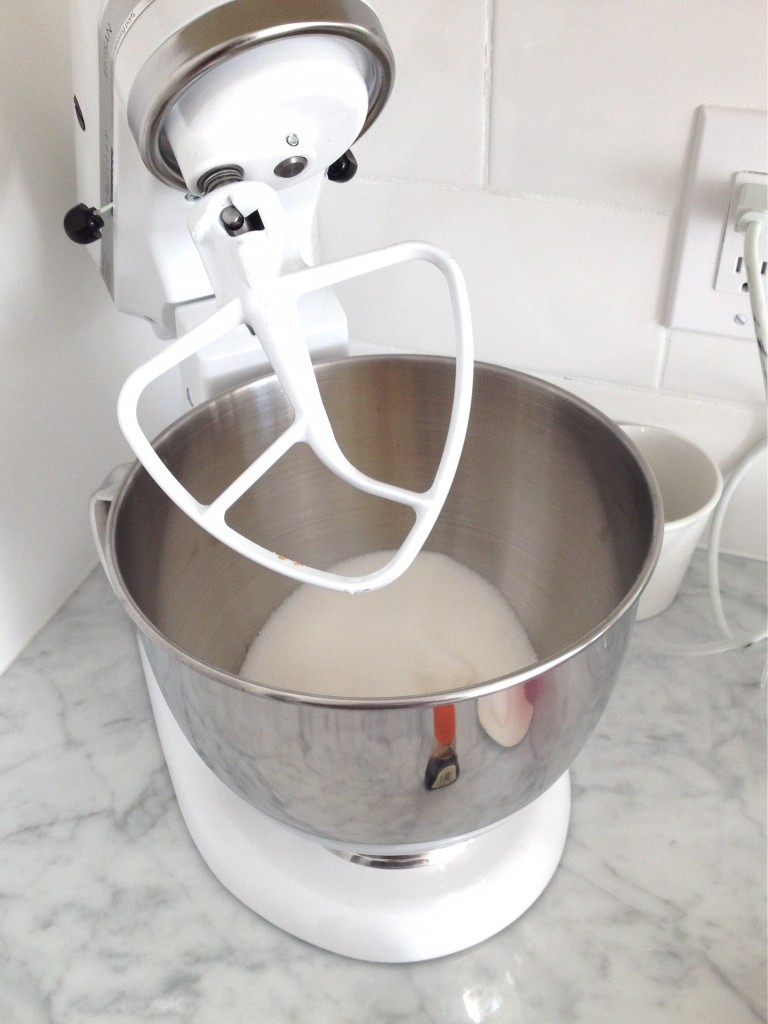 I used the plastic pourÂ guard at one point, but I didn’t really need it. I was just trying to use as many gadgets/attachments as possible.Â I used the paddleÂ attachment (above) for the brownies, but I used the whisk attachment to whip upÂ theÂ eggs for the madeleines. SwitchingÂ the attachments is easy and quick, as is cleaning them. 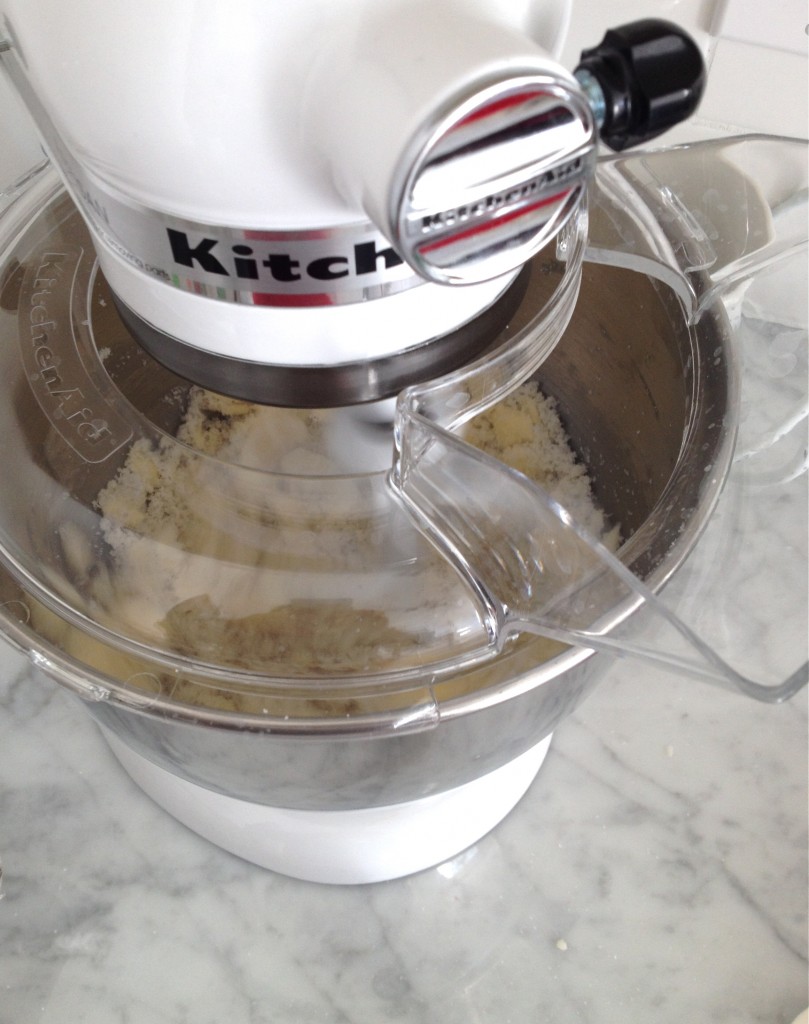 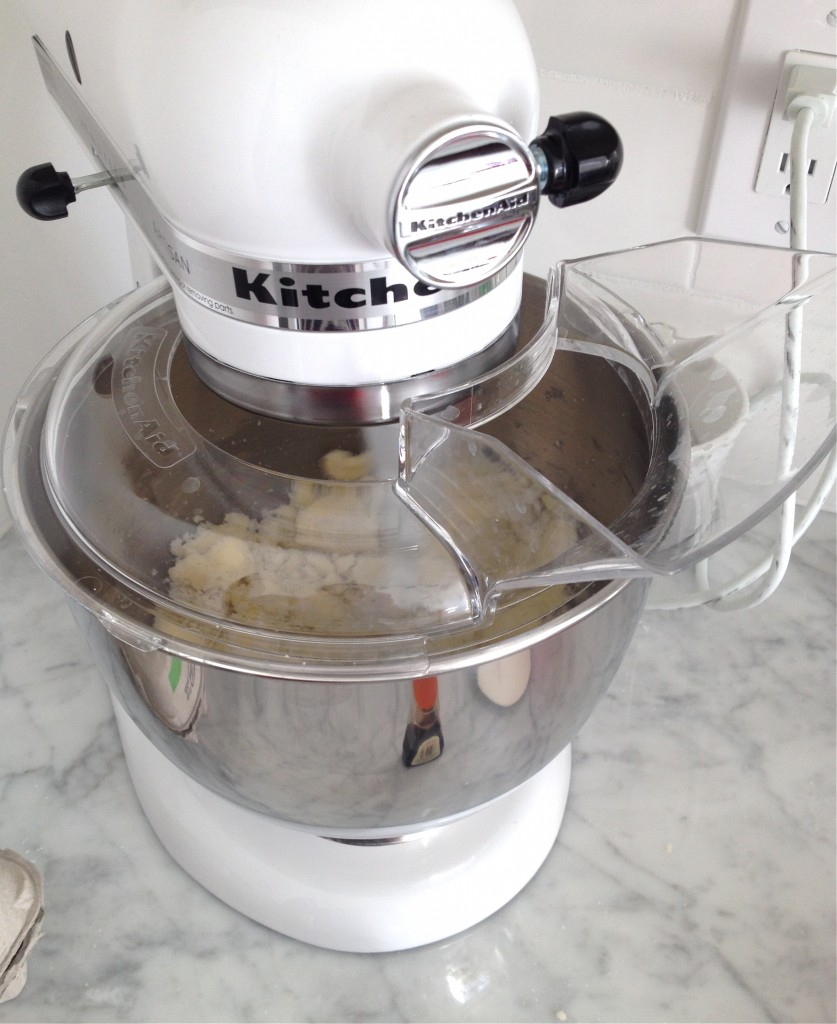 IÂ am very happy that I opted for the lift-arm mixer rather than the bowl-lift mixer.Â The arm lifts at the flick of a switch and the bowl attaches securely and simply to the base. 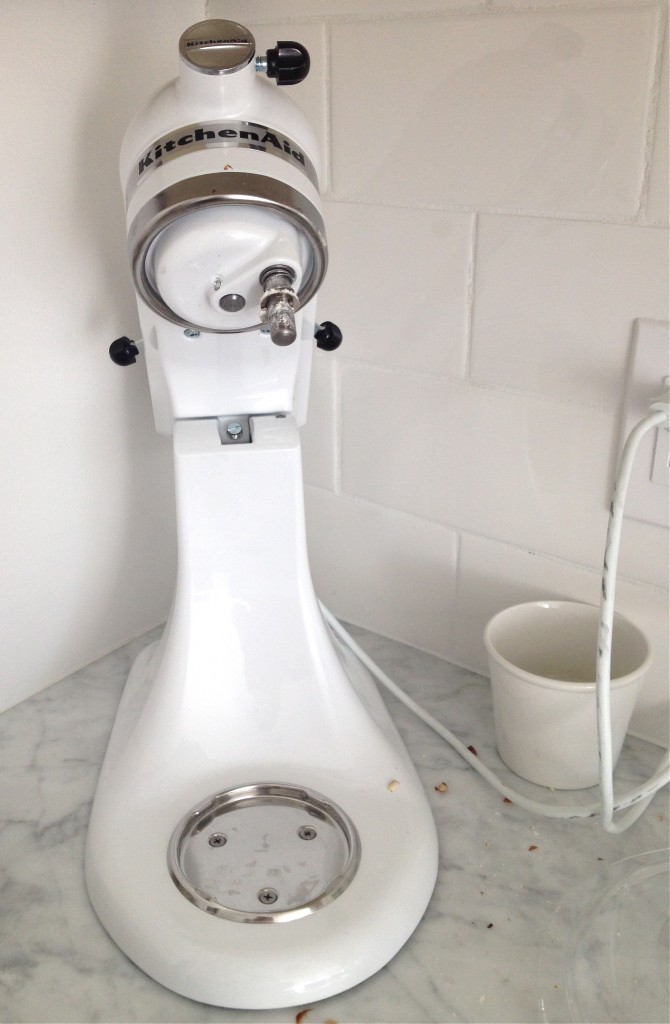 Here are the brownies before I put them in the oven: 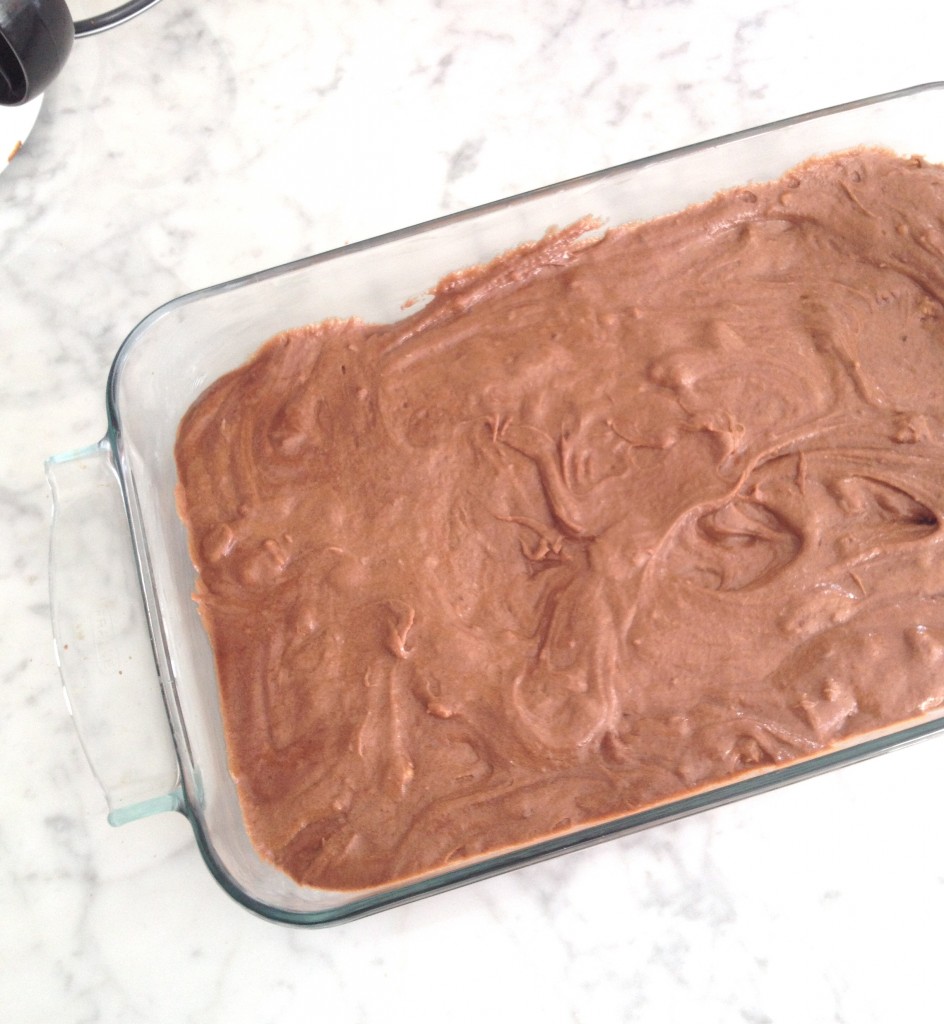 It’s a stylish machine, yes, and it looks wonderful on my counter (a stylish appliance? really? this is what I’m talking about these days? how old am I?), and so it seemsÂ I’m joining the “it’s so great, everyone should have one” club.Â I’ll share a few moreÂ photos in the upcoming weeks as I’m eager to try the pasta roller/cutter attachments!

I bought this peeler over the weekend. It’s a good one*. 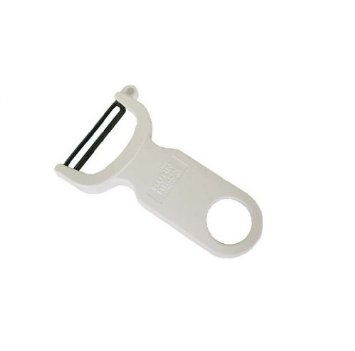 This has got to be the cutest funnel I’ve ever seen.