By now, you may have caught up on my stories from my trip to Italy in June (already almost two months ago!). If not, go ahead and click on the following links to catch up on my father-daughter trip (made possible by the folks over at Expedia.ca):

Italy – as you perhaps can tell from my stories – is all about la dolce vita. The people are my people. The food is my food. The way people enjoy each other’s company (with food, of course) works for me. I love so many things about the Italian culture (of which I was born into – lucky me!) and I hope you have – or will be able to – travel to Italy so you can experience it for yourself.

I have plenty to share today. In this post (part I for today), I want to highlight some of the things I love about Italy/my observations/things that amuse me. Later today, I’ll publish a post focused on my time in Florence.

My Italian is decent. I can get whatever I need, ask questions, and I can now even throw in a bit of sarcasm or jokes into conversation. I may not speak rapidly or using perfectly formed sentences, but I can certainly communicate. This isn’t to say that it isn’t hard. It is. I rarely practice Italian when I’m in Canada, unfortunately, so when I’m in Italy, I struggle with words and verb tenses. Luckily, the Italians were very kind and they told me that I’m brava. Grazie! 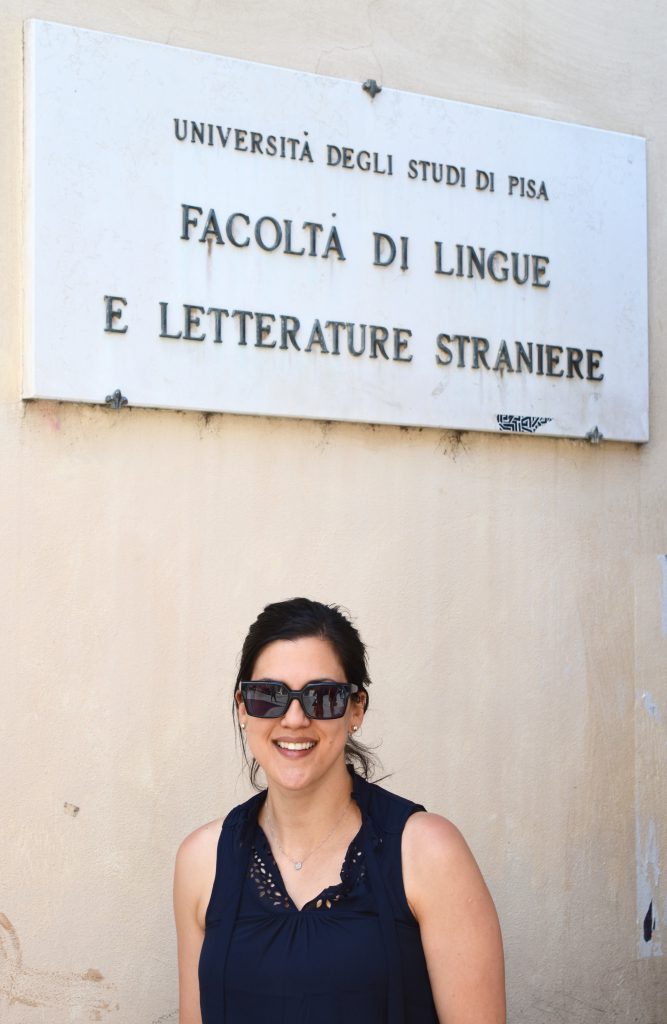 Given my language learning and teaching background, I can easily get fixated on words, pronunciation, and expressions when others might overlook these things or find them uninteresting. So, there are plenty of words that I absolutely love to say and hear; some of these are…

This means “to chit chat.” I love how this word sounds. It sort of sounds like kia-kia-ra-reh (with rolled “r”s). It’s been one of my favourite words for many years now, I have to say. When I saw these five ladies huddled on a bench in Rimini, this is the word that came to my mind. There they were, enjoying the day, gossiping, chatting, and watching the world go by. Awesome. 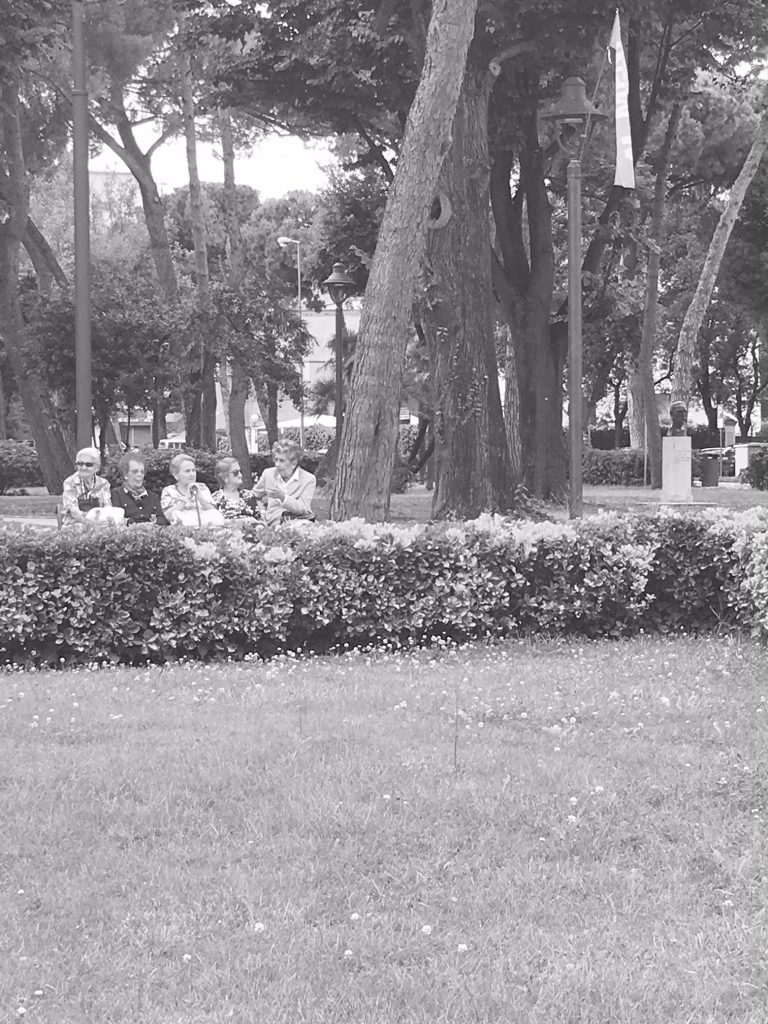 When I was at the beach, I could not remember the word for towel at all. I used the English and French versions before the kind beach cabana man responded to me with “si, si, un’asciugamano”. I was like, of course! I love how this word sounds. For one simple item (a towel), this word has five syllables. It sort of sounds like ah-shoo-ga-man-oh.

This is perhaps my most favourite word of the whole Italian language. “Era un casino” sort of means “it was chaotic,” but casino is a much more enjoyable word, in my opinion, than chaos. While the word seems simple when you say it/spell it/hear it/write it (it is pronounced like ka-scene-oh), the word is a powerful one! It can be used for so many things…traffic, congestion on the sidewalk, disorganized supermarket shelves, bikes and pedestrians sharing a path, confusion over a restaurant reservation…there are countless uses, and when no other word comes to mind to describe a frenetic situation, you can just use casino. 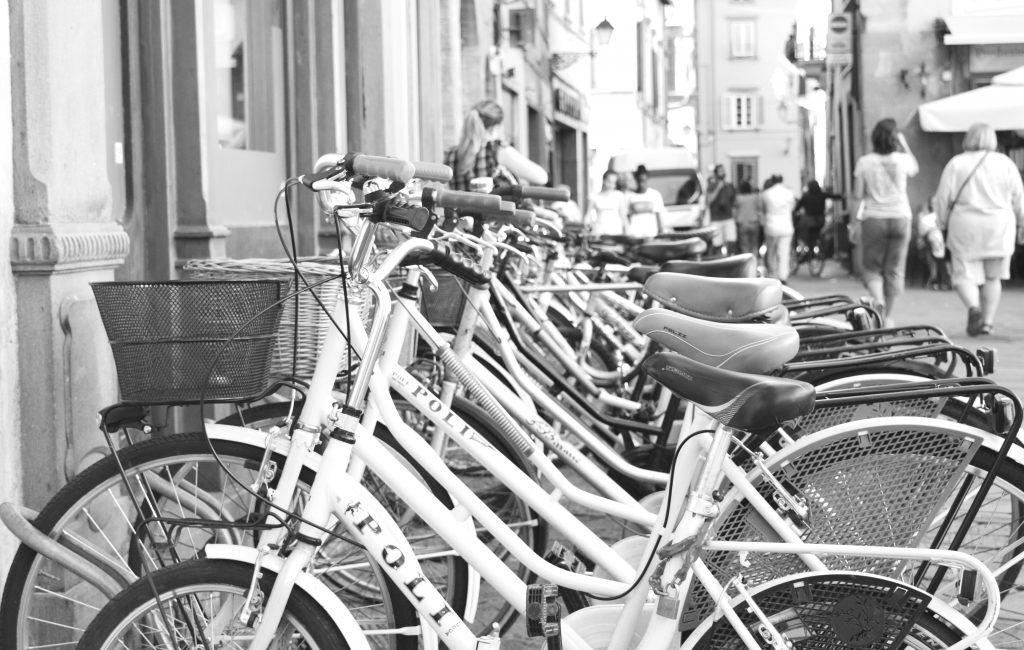 parking areas for bikes, scooters, and cars can definitely become a casino! 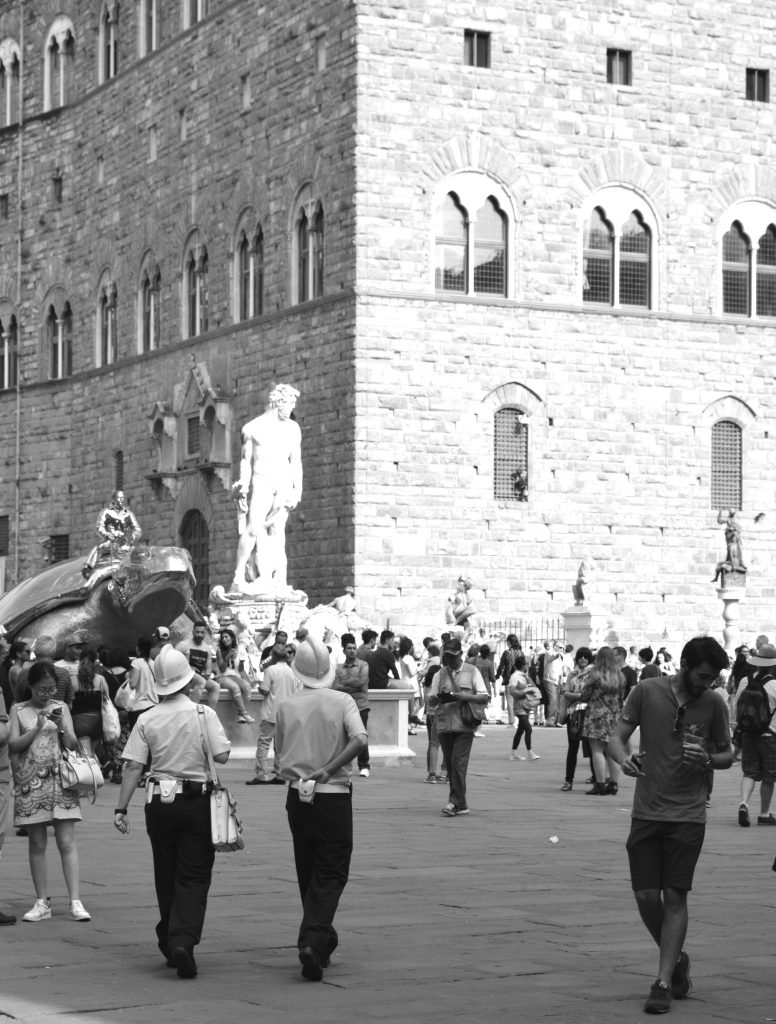 I think I like this word mostly because of how it looks when it’s written out. I love that dip of the lowercase “g”. Honestly, this is how geeky I am when it comes to language. Not only do I think about the meaning, and the sound of the word, but I also judge a word by its look. Seriously. True story. #crazyforlanguages

So this word means wonderful, but it is so much more beautiful than the word wonderful. It is pronounced like mare-a-vi(g)-li-o-so. Try it. Like it? 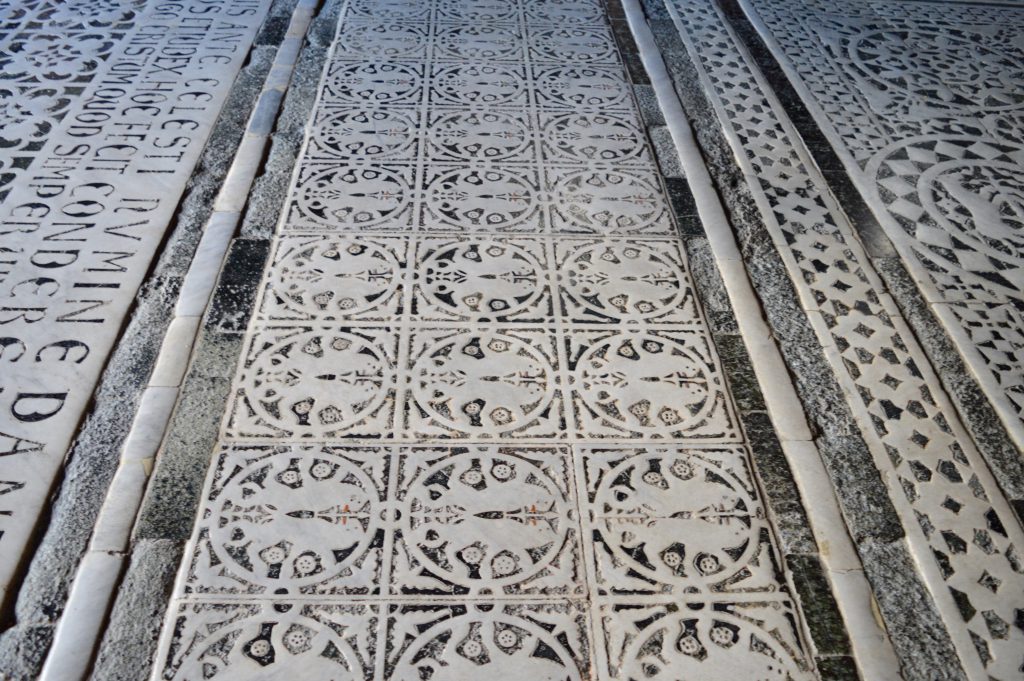 the carved floor at San Miniato al Monte in Florence was meraviglioso! 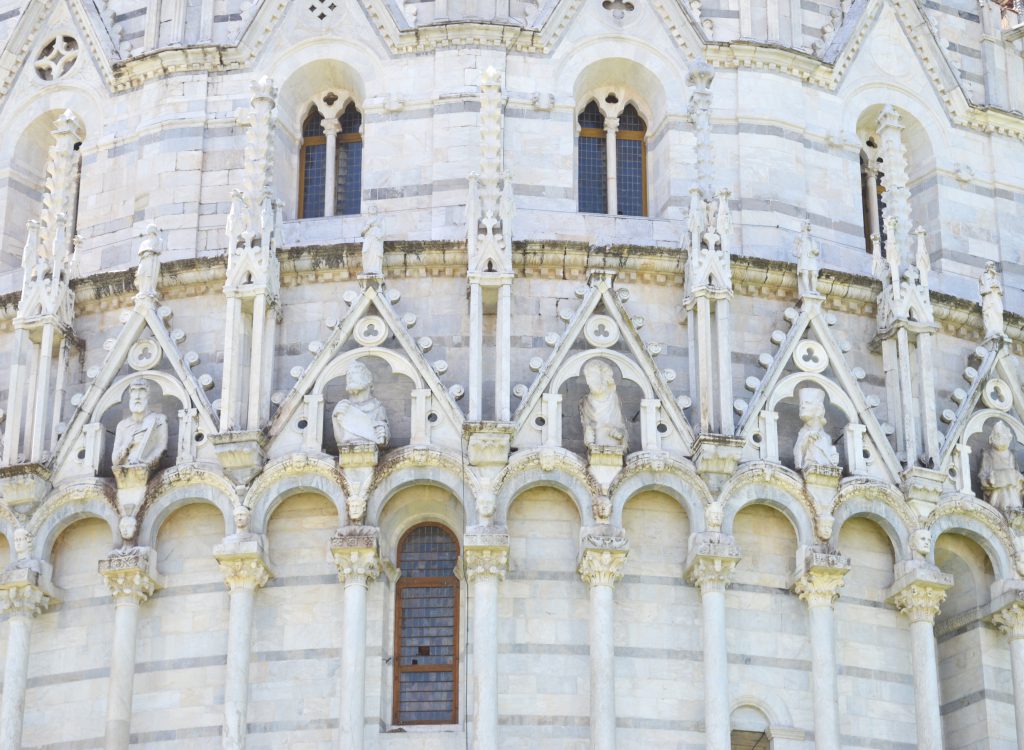 the Leaning Tower of Pisa is also meraviglioso!

So not to hog this post with everything language-related, I’m offering up some other observations…

Thank goodness I’ve been in cars with attentive Italian drivers. While there are rules of the road in Italy, sometimes I feel like they’re optional. Stay in your lane or don’t. Signal or don’t. Stop at a red light or don’t. Like I said, optional. Speed bumps don’t seem to be of much use. Unless maybe you’re on a scooter and you don’t feel like jumping out of your seat…then, maybe, you’ll slow down at the speed bump. Watching people manaover la rotonda (the roundabout) is fascinating. I don’t know why people in Waterloo have such a tough time with them. The Italians have them under control. No stopping, just go, go, go!

I’m not judging parenting styles here, I’m just sharing with you what I’ve observed (generally). In Rimini (a beach town), kids were out and about with their parents until past 10pm and 11pm. No. Big. Deal. They weren’t screaming or cranky, they were just there. Hanging out with their parents and friends. Playing. Chatting. Riding bikes. I know many of them were on vacation, and we were at the beach, but I was still surprised to see how engaged they were with beach life. And they weren’t being bribed with gelato or toys as far as I could tell. (I seem to be more sensitive to children’s behaviour/parenting styles since I began working at a university. I’m always surprised by the number of parents who come in with – and do the talking on behalf of – their adult children. I’ve even heard of some who want to go to orientation days with their children.)

Children in Italy are more than welcome at restaurants. Young Italian children that I’ve known (or observed) know how to use forks and knives properly, and they just do as the adults do. They may be eating pizza while their parents work on a three-course meal, but they’re doing so politely, calmly, and without (an apparent) fuss (I know it’s not all roses, but I was always surprised to see how children – and their parents – comported themselves at the dining table).

Italian children seem to ride bicycles from an early age (as in two-wheelers, without head-to-toe padded protection as I’ve observed where I live). They’re in the street. They’re in the bike lanes. They’re riding alongside their parents and friends. Many don’t wear helmets. These kids would just go-go-go without hesitation. They navigated the bike lane and road crossings impressively. It’s just the way things are done (okay, maybe moreso in Rimini than in the centre of Florence, but you get the idea, right?). Cars and pedestrians are aware of cyclists, but it was still surprising to see everything in motion on the shared roads. 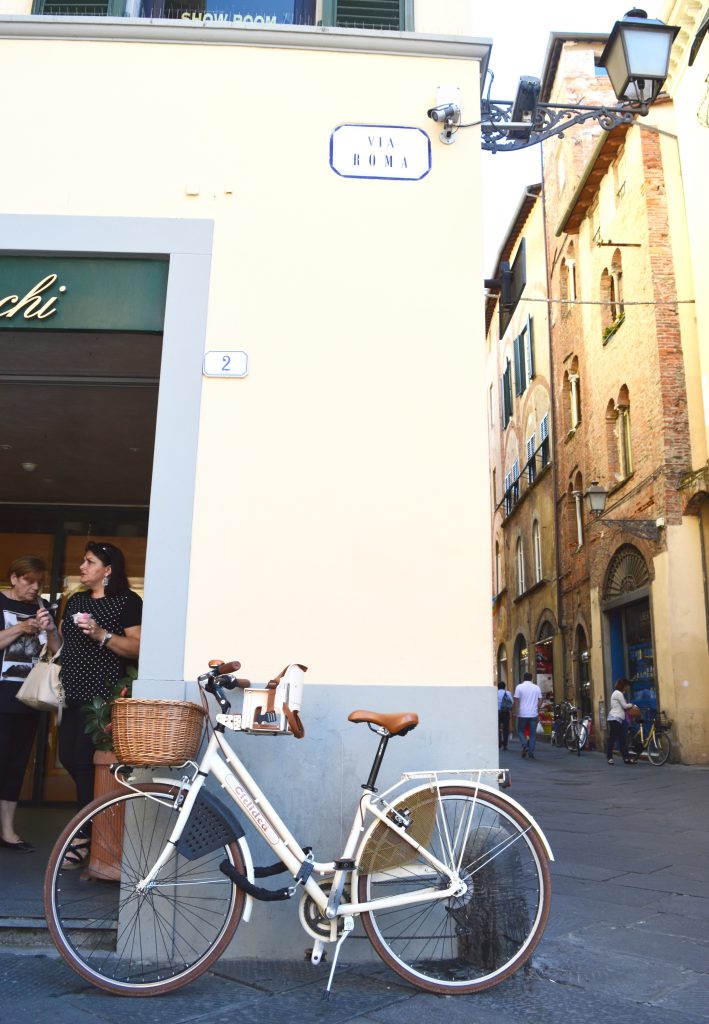 a beautiful white bike (notice the kid seat at the handle bars) in Lucca, Italy

Check back later today for my recap of things to see and do in Florence.