As you are likely aware, I took part in my first triathlon relay this past Saturday at Lakeside (near Woodstock, St. Mary’s, and Stratford). The idea of the relay came to my friends and I after a summer BBQ just over a month ago. Our friend Chris was training for the full triathlon (750m swim + 20km bike + 5km run), but for the rest of us, we teamed up to form one relay team. Team work is all about drawing on people’s strengths, and that’s exactly what we did!

My job was the 750m swim. In preparation, I bought a pass to Moses Springer Community Centre Pool (50m lengths), and swam 2-3 times per week over the course of a month. Training at the outdoor pool was wonderful. I looked forward to my swims in the sunshine, and it was fun to meet Chris there so we could train and encourage one another. I used to swim a lot when I was a young lifeguard, so getting back into it didn’t take as much effort as I had originally anticipated. I was swimming 1000m+ front crawl on my training days, and I felt pretty good about my endurance and speed.

When TYR agreed to sponsor Chris and I, we were thrilled. Wetsuits, as any triathlon participant knows, are essential for cold lake swims and to increase buoyancy in the water. (I didn’t know all of this when I signed up for the triathlon; I learned quite a bit along the way!) Chris received the high-tech Hurricane Category 2 wetsuit with awesome chest panels and cool graphics. I received the sleek all-black Hurricane Category 1 wetsuit that made me feel like a superhero.

I hadn’t ever worn a wetsuit prior to this one, so the experience was a brand new one. It took me at least 15 minutes to put it on the very first time. The TYR suit came with booties and gloves that I wore so that the suit would slide on better and be protected from my nails. The suit also came with instructions, and I read them before attempting to squeeze into it. Basically, you should put the suit on one leg at a time, easing the legs on, straightening things out at the hips, then carefully putting on one arm then the other before zipping up the back closure. If I video-taped my experience, I have a feeling it could have made a lot of people laugh!

Due to some shipping drama, my suit only arrived the morning before the race. I only had one pre-race practice swim with it, but I’m so glad I did! In the future, I’d definitely wear it a few more times pre-race just to get used to the feeling of swimming in another layer. What I loved about wearing the suit is that (in addition to making me all superhero-like), it made me float. Such a cool feeling! And then when I swam, oh my, it made me go fast! Well, faster than without the suit, of course. Loved. It!

Race day came and it was pouring rain as we drove the hour from Waterloo to Lakeside. Rain. Ugh. Not good for a triathlon day! I was excited about the whole event – minus the rain – and eager to take part in the team relay and cheer on Chris, too. Luckily, the rain stopped before the race began, so we were all relieved.

The race announcer announced, though, that because of the warm lake temperature, wetsuits weren’t allowed. Say what? Swim in a lake without a wetsuit? No thanks. If participants used a wetsuit, then they wouldn’t be ranked in the standings. Chris and I ignored the rule and squeezed into our suits. 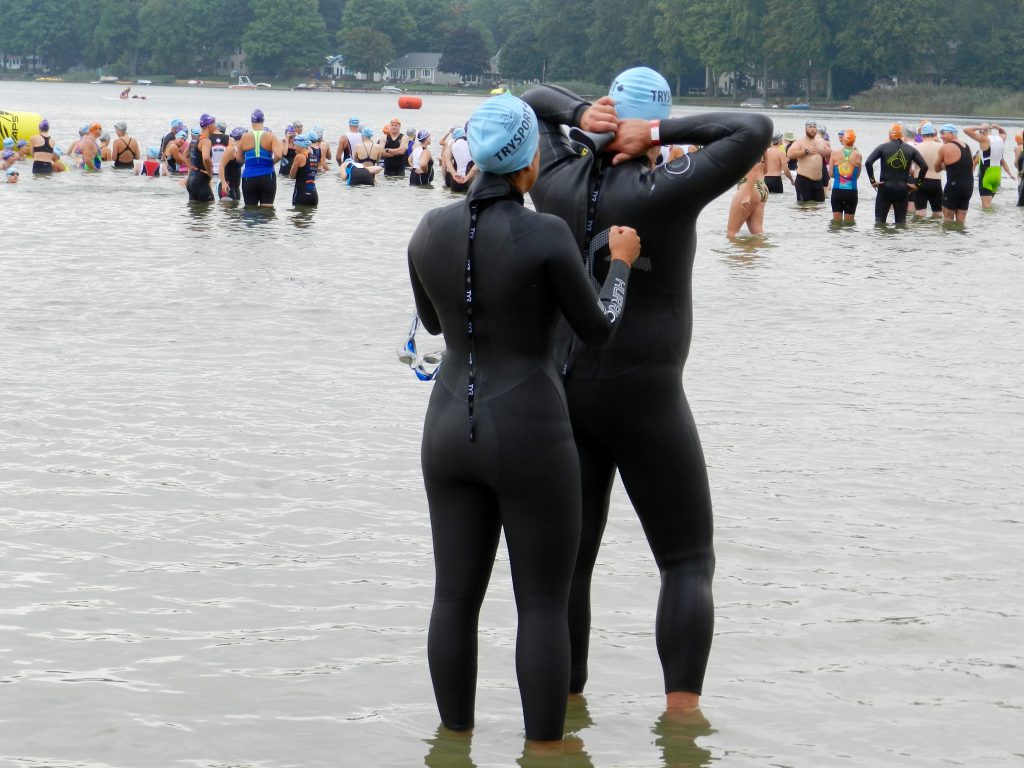 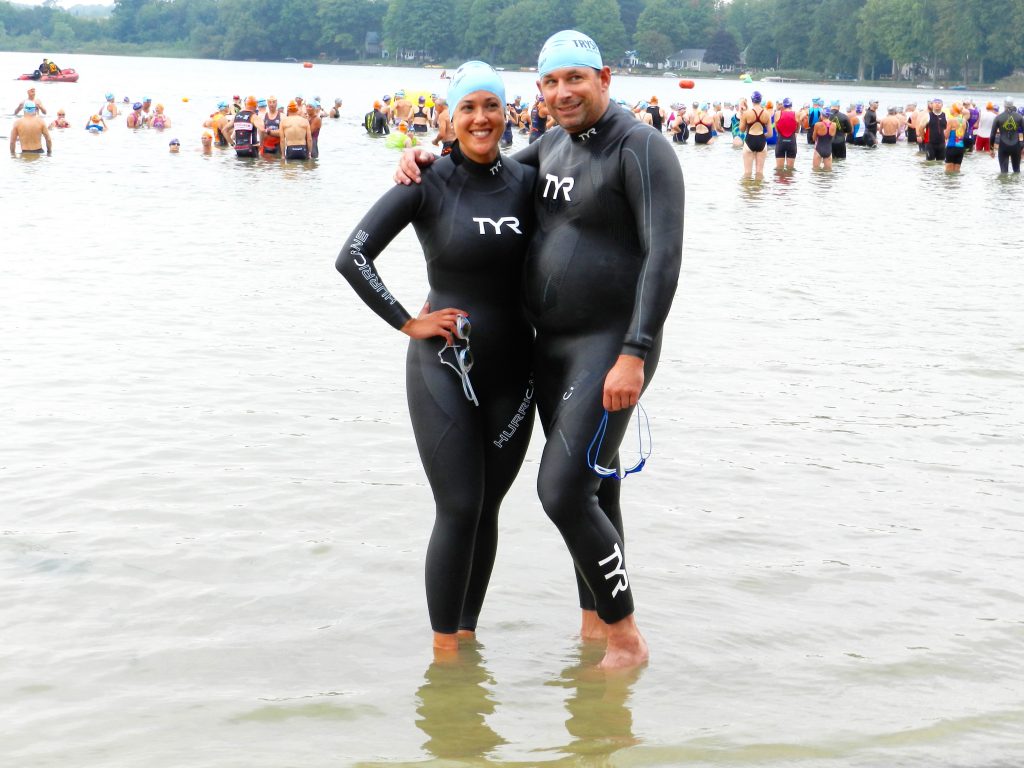 I’m being honest when I say that I was completely eager and excited to swim the 750m for my team. I wasn’t concerned about water creatures or slimy water plants because I knew I had the layer of protection from the suit. 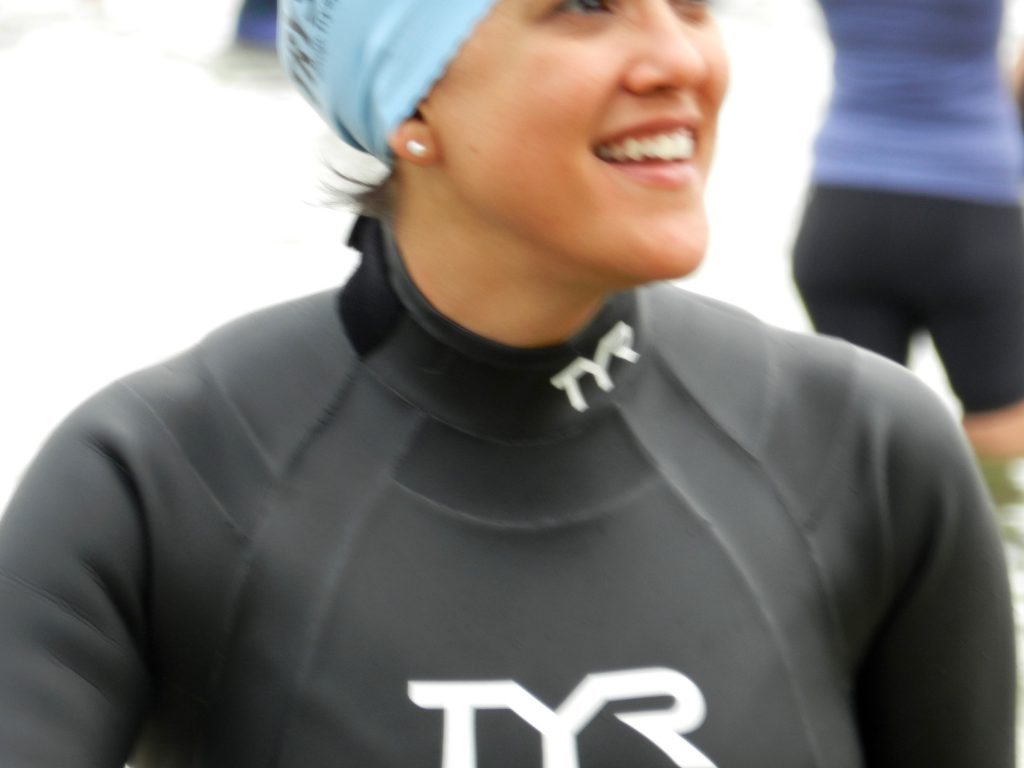 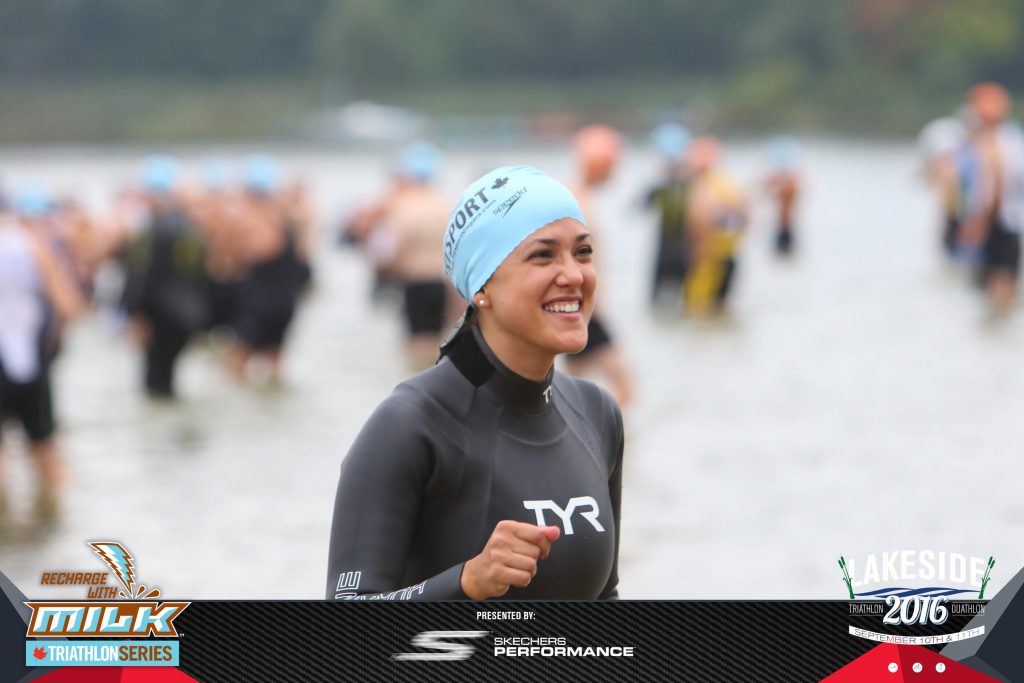 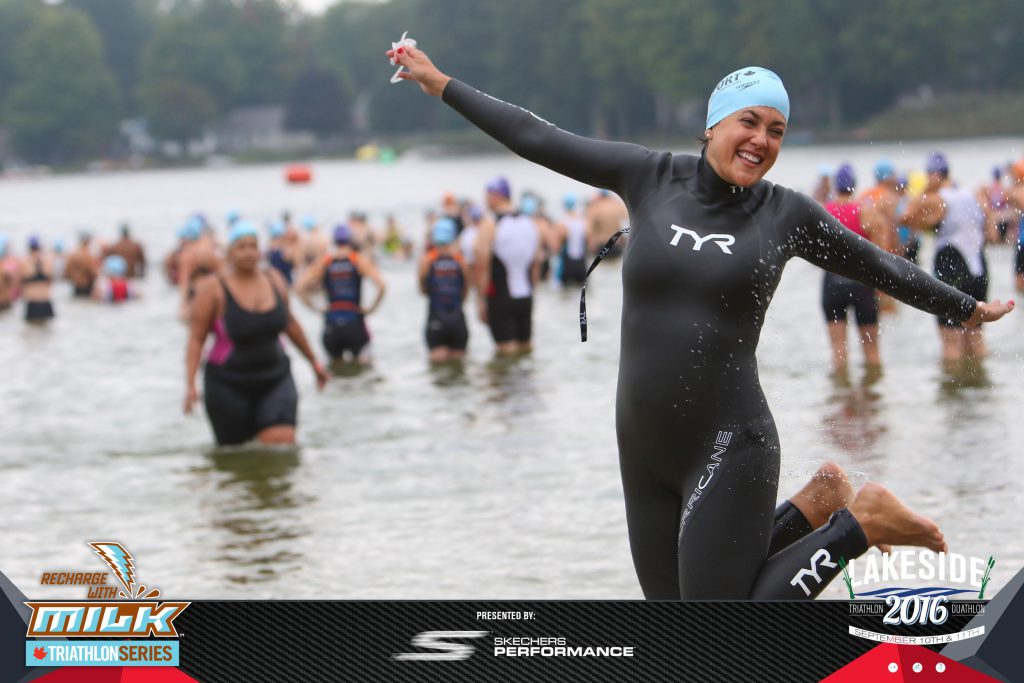 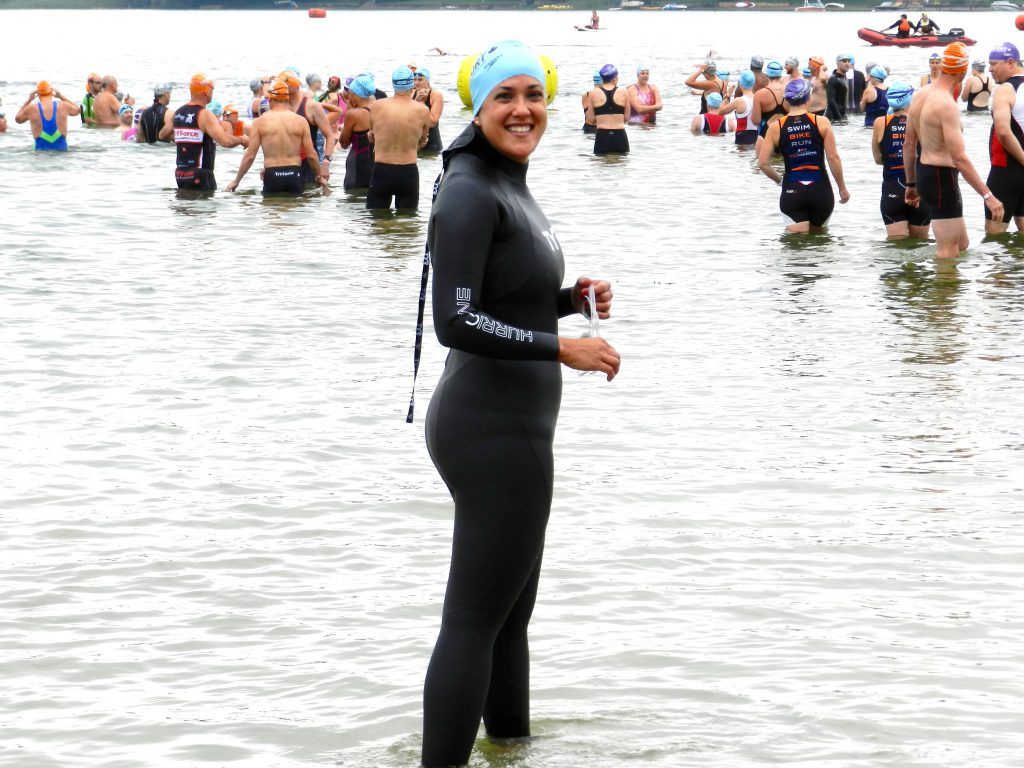 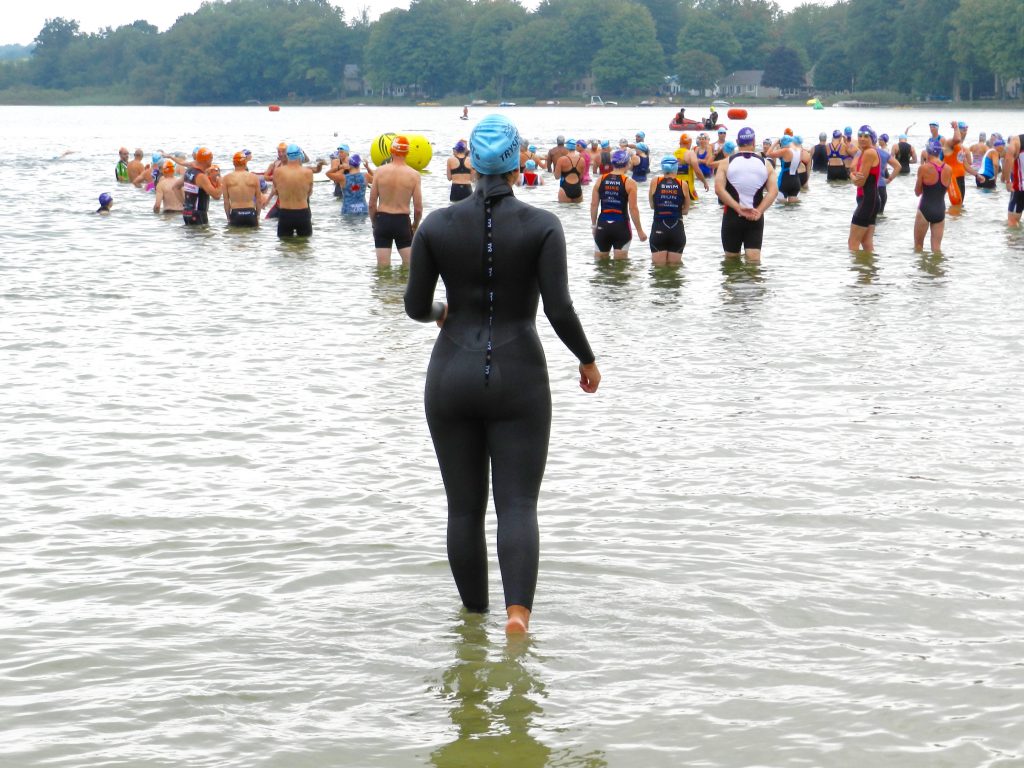 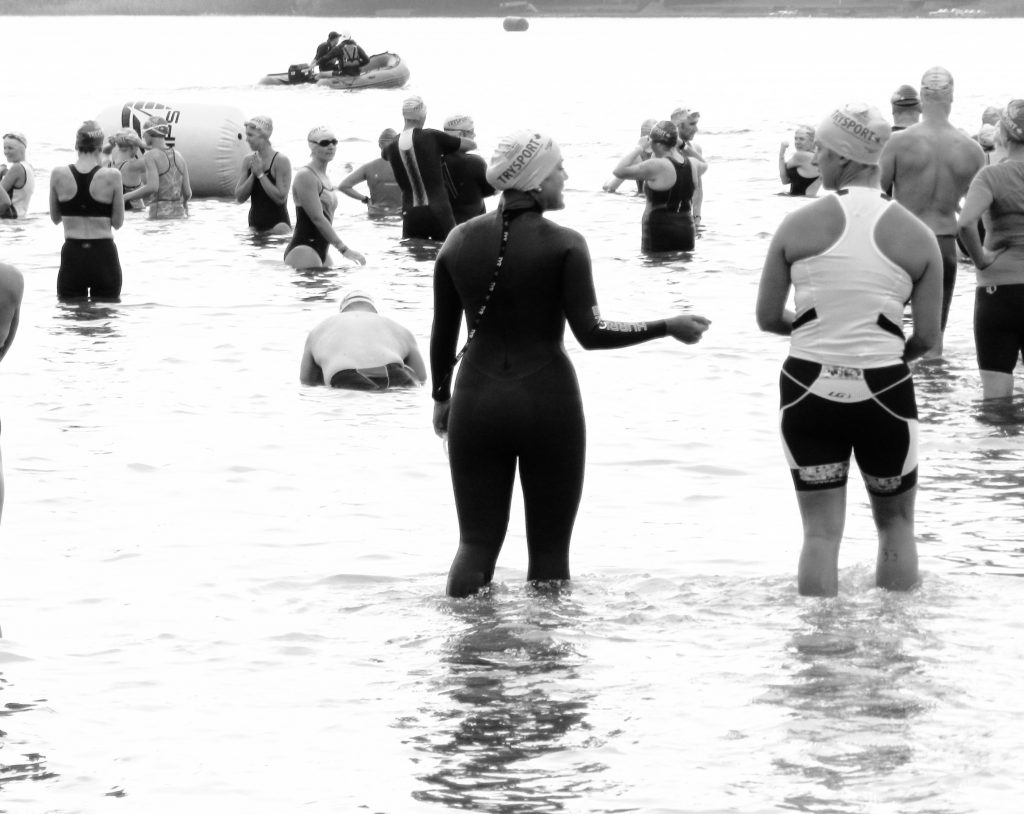 I was absolutely not ready for what happened when the bullhorn blew and it was go time. I took my first stroke and I basically freaked out. Okay, not a full freak-out, but I was not fully prepared for the dark water. I was disoriented from the start, and concerned that I wouldn’t be able to swim in a straight line. I’m a strong swimmer, but I was out of my element (I’m a pool swimmer from the city! In Florida, I use a floating mat in the ocean!).

This feeling of (slight) panic was new for me. The only way I could have avoided the panic was to practice lake swimming. I should have. I will in the future. The darkness was not good for my brain.

So, realizing that my regular stroke-stroke-stroke-breathe rhythm would not work, I opted for breast stoke until I got used to things. After the first turning point marker in the lake, I inserted some front crawl, but I opted for breast stroke for most of the swim. I was so thankful for the wetsuit because I know that I would have felt worse without it. Most swimmers as far as I could tell were swimming some combination of front crawl, head up front crawl, and breast stroke. A lot of people were swimming crookedly. A few swimmers were yelled at by the lifeguards because they were swimming off course. Oh man, what a casino!

Our team did really well, finishing the swim+ride+run in 1 hour and 21 minutes. It took three of us to complete the triathlon, but we did it! Chris, on the other hand, finished all three events on his own like a champ! 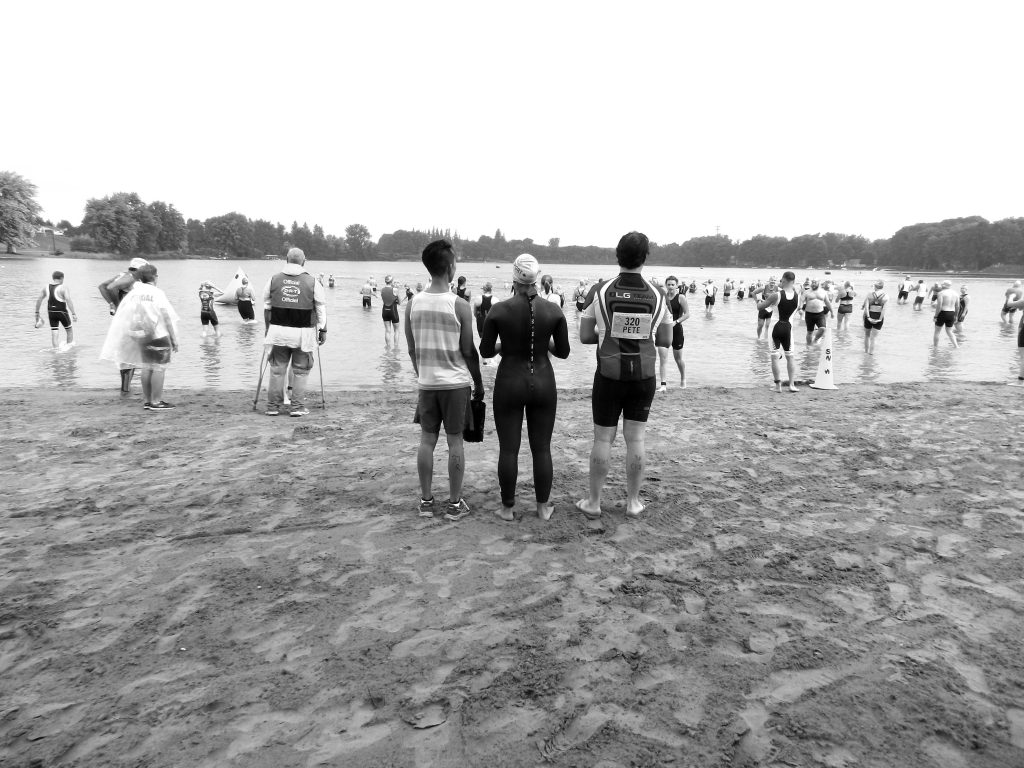 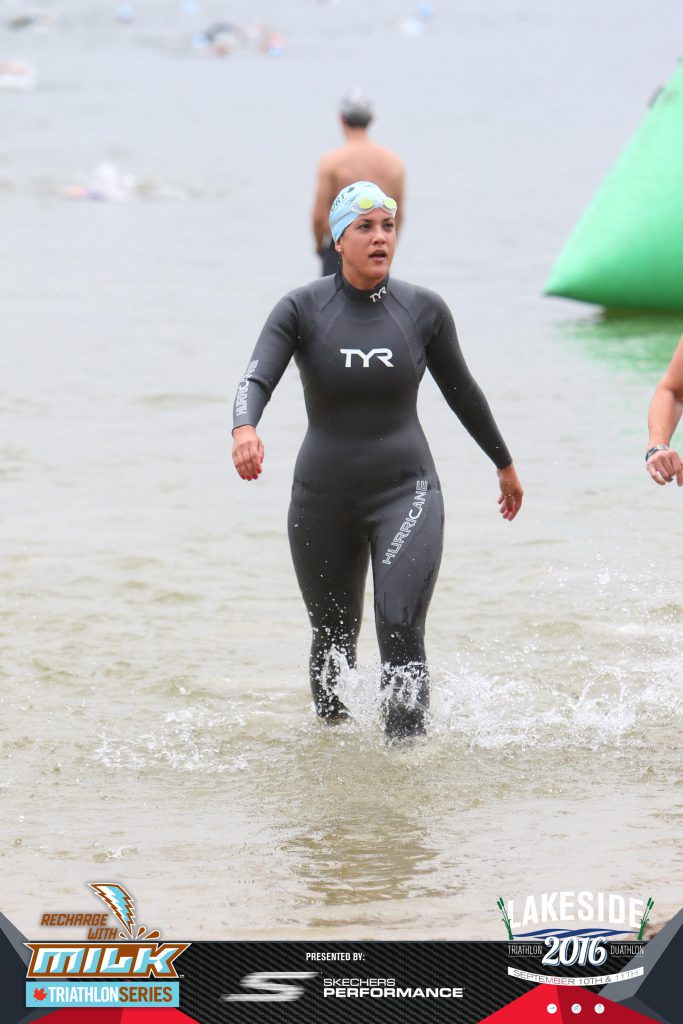 I’ll be happy to do another triathlon relay in the future, but I’m not yet convinced of doing all three events on my own. Two, sure. But three? How!? Does anyone have any tri experiences they’d like to share? Please do!

A million thanks to Pat B. for braving the rain and taking so many photos! Unmarked photos by Pat B. Marked photos by Zoom Photo for Multisport Canada.
Thanks to Erika for putting up with all of my panicked emails regarding the shipping drama.
Many thanks to TYR for sponsoring this post. All opinions are my own.