Thanks to Expedia.ca, I was able to join my Dad on a trip to Italy last month. As you may remember, Dad was heading to Italy for a reunion with his highschool friends. He had done this for the first time last year after a 50-year separation. Fifty! Five-Zero! Can you believe it? His friend (who I’ll be introducing in a future post!) connected with him via Facebook a couple of years ago, and they’ve been in touch ever since. 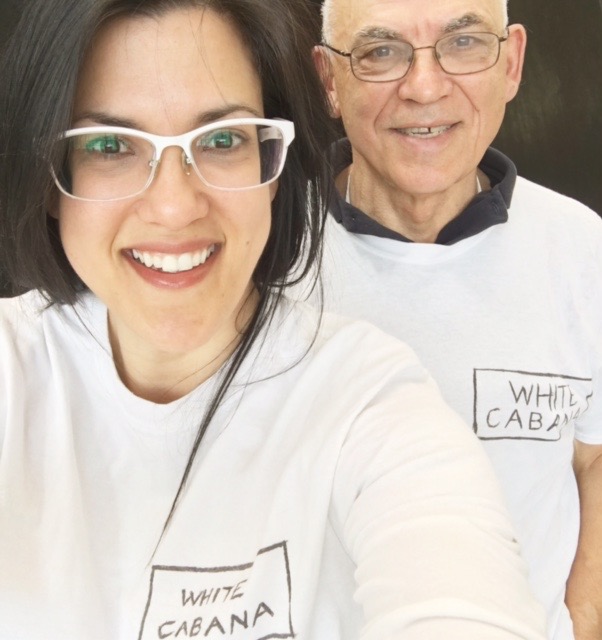 our first selfie of our Italian vacation (this selfie wouldn’t have happened if not for Expedia.ca!)

I thought I would share five tips for traveling with – ahem – an older parent just in case young(er) daughters and sons are giving this type of vacation some consideration.

Now, before I get into my five tips, I should admit a few things.

1. Dad is a seasoned traveler.

This most certainly helps the whole father-daughter (retiree-youngen) travel situation. The fact that Dad has been traveling around the world since he was a teen (he did come to Canada on his own when he was 19 after all) means that he’s very familiar with airports, taxis, train systems, and “other”ness.

2. Dad and I have traveled together.

I can’t even count how many trips we’ve taken just the two of us. Because we’ve traveled together, I have a good sense of Dad’s travel abilities. Knowing what he’s like when he travels or when he’s outside of his normal routines (retirees, I tell ya!) helps me stay calm and know when to push/not push limits. He also knows when to help me, when to organize things, and when to leave me alone.

Going to Italy may be intimidating for some because of the language barrier, but this was not an issue for us as both Dad and I speak Italian. Because Dad and I both know Italian, communication in Italy wasn’t the responsibility of only one of us. Since each of us could communicate with locals, it meant that neither of us was acting as “translator”. I’ve held this gig before and it can get tiring for everyone. 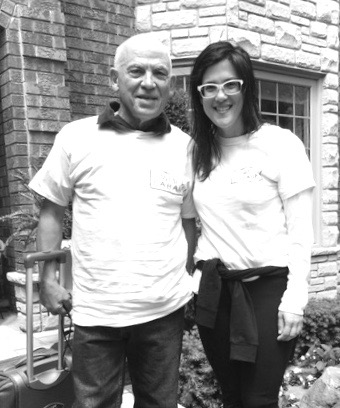 We’re just about to head to the airport. Dad with his luggage and me with wet hair. Perfect.

So, now that you know more about where Dada and I started, let me share five tips for traveling with (an older, but still active) parent. (Dad, I hope I’m not offending you with all of this age talk. Age is just a number after all, right? I know you’re reading this.)

1. Have a positive attitude.

There is a ton of info out there about how a positive attitude is key to just about everything. When it comes to traveling with a parent – or anyone, really – your attitude can make or break your vacation. Remember that you’re on vacation (hello, vacation!), and so really, nothing should get in the way of enjoying yourself.

Okay – another admission – Although I, like Dad, am a seasoned traveler, I’ve traveled quite a bit on my own. I love traveling on my own. I’ve gotten used to traveling on my own. While others are scared to travel on their own, I’m scared to travel with other people. True story. Anyone with me on this? Traveling with othersÂ  makes me a bit nervous because I don’t want to get in fights about what to see/do/eat, I want to see/do/eat what I want without having to consider others (I’m so selfish), and I want to sleep in/see a museum/eat gelato for dinner/go to bed early/stay up late when I want. Totally selfish. Independent. Strong-willed. Whatever you want to call me. That’s how I am. Friends and family who have (dared to) travel with me are well aware of my issues and know that I need my independence. 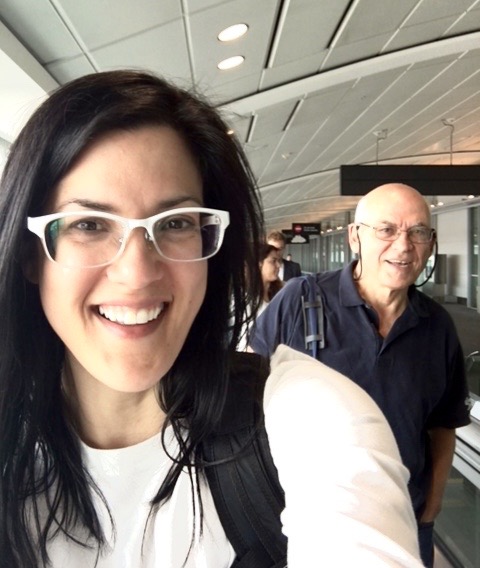 Here we are at Pearson on the tapis roulant (moving sidewalk – what are these things called in English or French?). In between selfies, dad’s saying, “This is why you always drop your phone, Jordana.”

So how do I travel with my Dad when I’m such an independent bugger? Well, I try to stay positive: 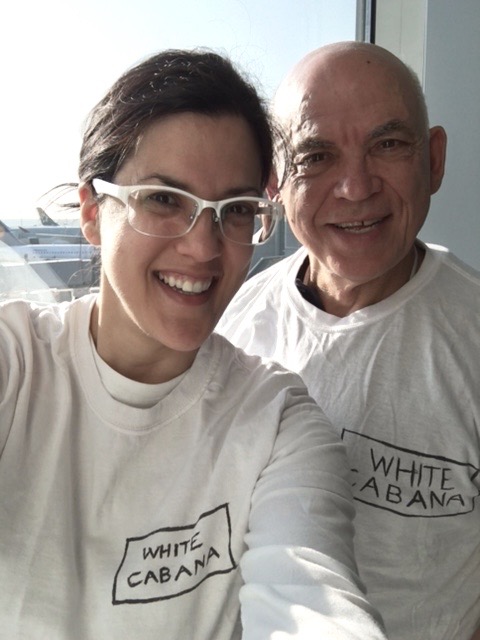 We made it from Toronto to Frankfurt. We look tired but happy. Dad’s saying, “Make sure you get the planes in the background, Jordana.” My response, “I’m half-asleep, Dad. I’ll do my best.”

Okay, this may sound rude, but I’m going to say it anyway. Just because your parent may be 30+ years older than you, it doesn’t mean that s/he is not capable.

I have faith in Dad’s abilities. I know he can pack and carry his own luggage, connect to wi-fi independently on his iPhone, ask for directions, navigate trains, book things online, and check-in to his flight via the airline’s automated check-in kiosk.

Dad’s very capable and if he needs help, he’ll ask. I am confident that if Dad needed me to do something for him, he’d ask. In general though, I keep my expectations high so that he doesn’t fall into the “my daughter organizes everything for me” trap. That’ll just make his brain lazy, right? (I hope noone is calling me out on being an ageist. I’m not an ageist. I’m a realist.)

So, I’d recommend that you have faith in your parent’s abilities to travel. S/he may not do things your way at your speed, but s/he has made it through a lot of life without you. Your parent can do this! 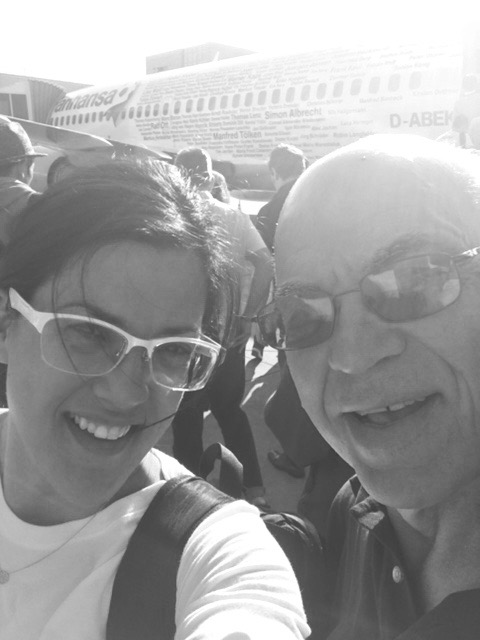 We’re ready to board our Lufthansa flight from Frankfurt, Germany to Bologna, Italy. Dad’s saying, “Look at all the names printed on the side. Who are they?” My response, “Look here, Dad, for another selfie.”

Dad and I aren’t the most perfect communicators on the planet (wait until I share my Pisa photos with you!), but when it comes to traveling together, I think we’re pretty good at checking in with one another about status/sight seeing interests/fatigue levels/meal preferences/etc.

It’s also helpful to know your parent’s eating habits. Food is a major part of my life (and my family’s), but we all have our preferences. Knowing Dad’s limits when it comes to food type preferences, meal times, and eating out helps me organize my own meals and dining experiences. There’s no point trying to convince Dad to eat dinner at a fancy restaurant at 9pm when I know all he wants is a light meal at 6pm. You know?

While I do admit that my Dad is very capable, I’m aware of limits. When I’m too quick at airport security or walking too fast to catch a train, I know that he won’t keep up, so I slow down or I ask him if he wants help (he never said yes, now that I think about it). If we miss a train, we miss a train. Another one will come along. (Side note: We never missed a train. In Bologna, we hustled and made it with 30 seconds to spare. Go team!) 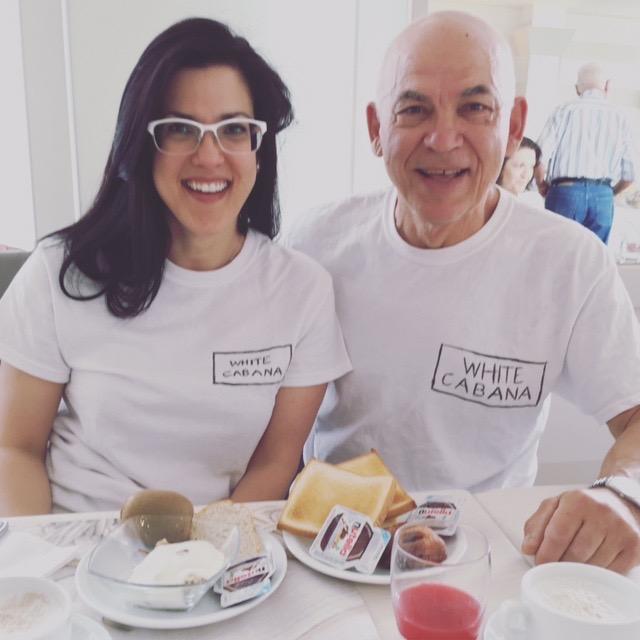 Breakfast in Rimini, Italy. We’re both fans of Nutella. #truth

So Dad doesn’t want to eat dinner at 9pm at a fancy restaurant. No big deal. I’m happy to go on my own. I think having time away from one another is a healthy part of traveling with others. When each traveler has some independence, they get to explore what they want and take a break from talking (seriously. especially when you’re spending so much time talking in your 3rd language as in my case. it’s totally tiring.). Exploring a city independently means that you’ll have stories to share when you do catch up. And that’s so fun!

Dad and I had time apart during our Italian vacation, and I think this made us both happy. He’d get sick of me just as much as I’d get sick of him if we were to spend 24 hours a day together. When we met up in Florence after I spent three days in Bologna on my own, for example, I was able to share all of my stories and photos with him. And he was able to fill me in on what he’d been up to in Florence. I thought it was great. 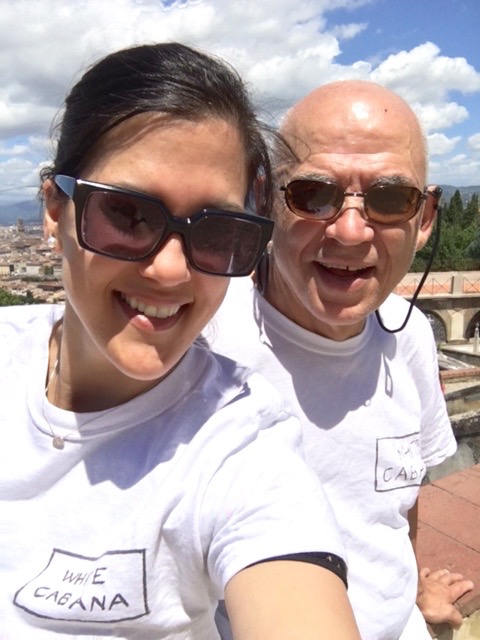 5. Know when to take the lead.

Even though you, like me, may be traveling with an independent, capable, and experienced parent, I think it’s useful to know when you should just forget about all of that stuff and take the lead. This could mean following the signs at the train station for both of your sake, asking for directions, or making final decisions about what restaurant to go to.

Taking the lead means you get to show your parent how capable you are, to reassure them that you’ve got things under control, and to give them a chance to rest or regroup. Taking the lead might force them to try something out of the ordinary. And if your parent wants to take the lead for a chunk of time, let them. Dad, for example, was in charge of booking all of our trains. Awesome. Worked for me. 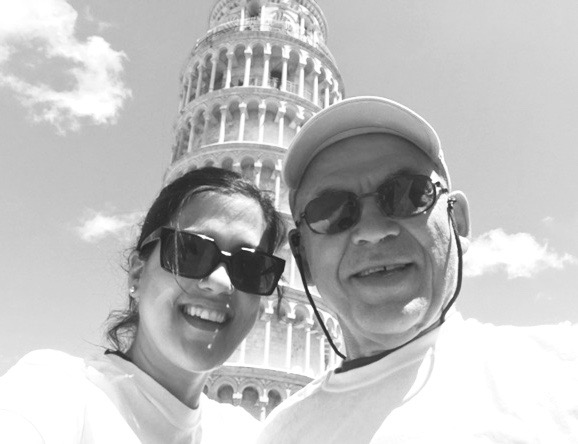 selfie with the leaning tower in Pisa, Italy

Make matching t-shirts to tell the world that you’re a team! It was absolutely hilarious to travel around Italy with our matching White Cabana t-shirts. I’m eager to make more professional ones for our next adventure…even if it is just to the grocery store. 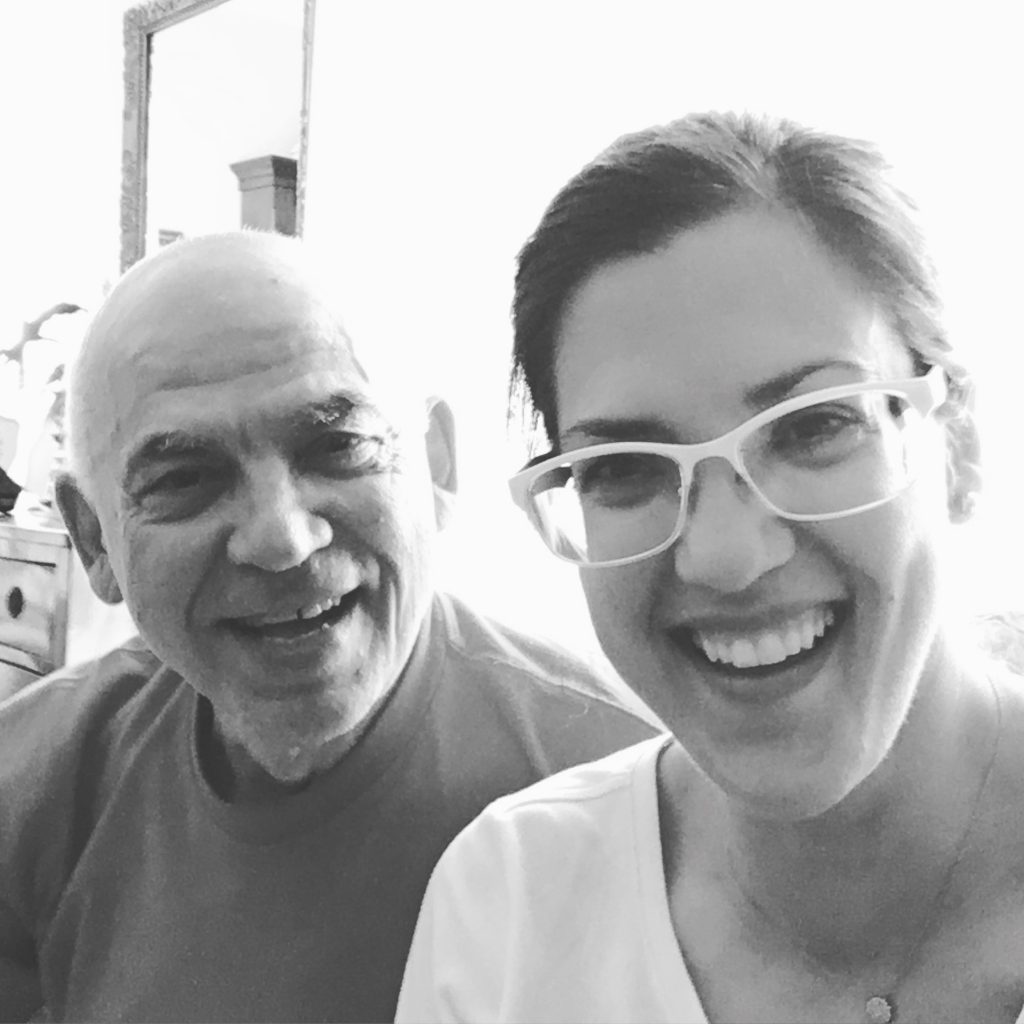 Many many many thanks to Expedia.ca for sponsoring my trip. Grazie mille! All opinions are my own.